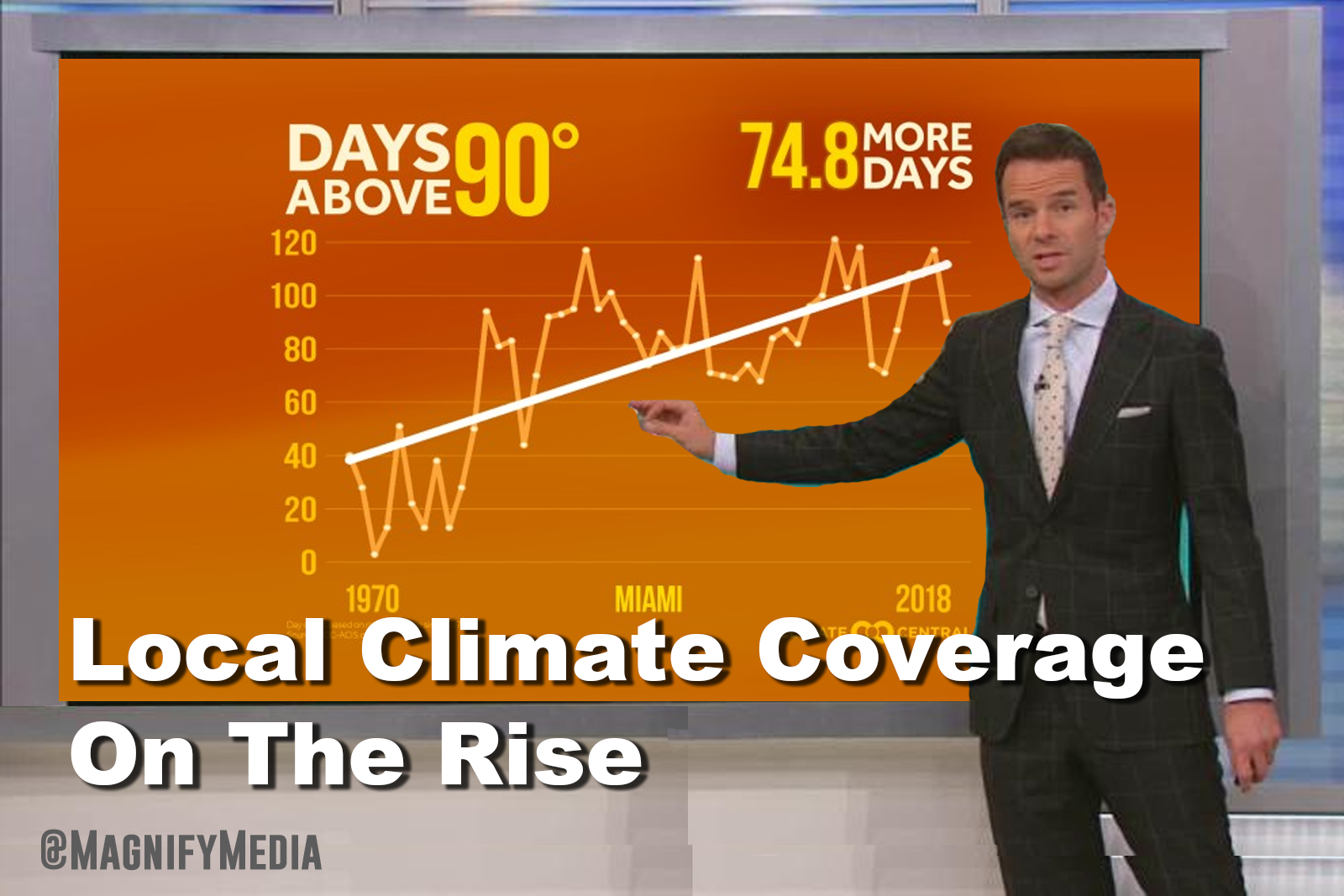 Television is far and away the most impactful way to tell stories about weather.

If you walk out your front door, you know if it’s raining, or cold, or if there’s a hurricane or a flood. But for most, extreme weather is something that seems to be happening somewhere else.

And yet stories about extreme weather, along with dramatic video of communities underwater or ravaged by tornadoes and hurricanes, are increasingly leading the newscasts of both local and national TV news.

Despite the increased coverage, or maybe because of it, viewers are finding themselves facing stories that often seem hard to place in context. Is the weather getting worse, or are we just covering bad weather with more minutes of airtime?

It seems 2020 will be the year local and national weather coverage will start to connect the dots with regularity, telling viewers that extreme weather is the result of climate change.

Local weather coverage could turn the tide in public opinion about climate change.

According to the 2018 Poynter Media Trust Survey, 76% of Americans have “a great deal” or “a fair amount” of trust in their local TV newscasters. That’s a full 21 points higher than we have for the national news.

Local meteorologists are using their air time to connect the crisis to the community level, making it real for their viewers. Rising water levels impact local farmers, and rising temperatures are a danger to local communities.

But local meteorologists are running the risk of alienating some of their audience, thanks to years of politicized disinformation.

“I have become very aware that not only is this a problem, but it’s real — and I need to make sure that I’m communicating that as best I can,” the chief meteorologist at ABC15 News in Phoenix, Amber Sullins, told Yale Climate Collections. “For a lot of people in my viewing area, I’m the only scientist that they are ever going to see or meet, so I have a responsibility.”

This isn’t easy,  as audience members hear from The White House that climate change is a “hoax,” and the U.S .pulls out of the Paris Climate Agreement.

Greg Fishel, chief meteorologist at WRAL in Raleigh, North Carolina, knows he’s out on a limb. “We are also in many cases the main liaison between the science community and the general public,” Fishel told Yale Climate Connections. “So we have a tremendous responsibility to make sure we’re not letting any ideology into our science reporting — that we are dealing with facts and relaying them as accurately as we can to the public.”

How quickly are things changing for the local weather community?

In 2010 a survey by George Mason University reported that only about 54% of local meteorologists believed “global warming was occurring.” Less than a third believed climate change was “caused mostly by human activities.”

Just eight years later, that number had grown to 95%, according to George Mason University.

But many local meteorologists — almost 25% of those surveyed by George Mason — worried that talking about climate change on-air would be received negatively by viewers. And in a business driven by ratings, no local station can afford to push away viewers.

Local meteorologists’ work brings an at-times-overwhelming crisis down to the community level. In their reporting, climate change feels less like a far-off, paralyzingly enormous societal problem or a global burden. Instead, in the hands of a trusted voice you might run into at the supermarket, it becomes a hyper-local issue, one that directly impacts real people you know, putting the health and safety of friends and neighbors in the crosshairs of a climate crisis in our backyard.

So, what can you do as a media professional, an ad agency buyer, or a concerned viewer?

Start by supporting weather professionals who are reporting weather in a scientific context. When it’s hot out, don’t let broadcasters report it as “weird” or “wacky” weather. Instead, call them out for not reporting weather trends in historical context, showing charts of rising temperatures, and covering weather so its causes is known.

Conversely, if you see a weather story that connects rising tides, warming temperatures, and extreme stories to the warming climate, take a moment to thank meteorologists for telling the important truth about climate.

Bringing the story of climate change down to the community level can help viewers understand the importance of this story, and how it will impact their neighbors and family if it isn't addressed.