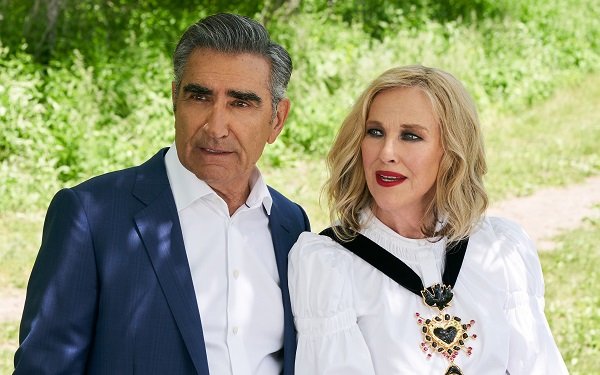 One of the biggest surprises about “Schitt's Creek” is that it is still around some five years after its premiere in February 2015.

I admit the play on words was a tad harsh, but it was also irresistible. What do producers and networks expect columnists and editors to do when we are presented with a title such as that? Leave it alone and not exploit it in any way? No can do.

Apparently, the TV Blog's negative reception to this comedy series when it made its debut did nothing to damage it or otherwise curtail what is now set to become a six-season run. The show's sixth season, starting Tuesday night on Pop, will be the series’ last.

In its publicity materials, Pop positions “Schitt's Creek” as its “flagship” comedy -- a haughty and ludicrous application of the word “flagship.”

The word comes down to Pop from its long-time (and long in the tooth) use by old networks such as Pop's parent, the old CBS (now part of ViacomCBS), which still refers to its evening newscast as the network's “flagship” broadcast.

Pop has none of the history, stature or even close to the number of original series as CBS and a host of other networks. So, for Pop to call “Schitt's Creek” or either of its other two current original series a “flagship” is absurd. You read that correctly: According to Pop's press website, Pop has three original series currently.

The TV Blog checked out the sixth-season premiere of “Schitt's Creek” the other day, and then made it through about two minutes of the second episode before deciding to bail. This was during a scene in which a man in bed had woken up and discovered that the man in bed with him had wet the bed.

This was probably meant to be funny, but with “Schitt's Creek” -- as with so many current comedy series that come and go today -- the “comedy” was elusive, at least to me.

And perhaps that's the point. “Schitt's Creek” appears to have gained enough of a following to persist for six seasons. Someone must like it. Or more to the point, someone must find it funny.

For those who are unfamiliar with “Schitt's Creek,” the show is about a formerly wealthy family who lost everything except for a small town called Schitt's Creek that the dad (played by Eugene Levy, pictured above) bought in its entirety some time before the family lost all of its money. So, five TV years ago, with no place else to go, the family went to live there.

Levy created the show with his son Dan, who is also in it, playing the Eugene Levy character's grown, gay son. Catherine O’Hara (also pictured above) plays the older Levy's wife.

In February 2015, I watched the premiere episode of “Schitt's Creek” and about half of the second episode before giving up. I have not watched a single episode since then until I had a similar experience the other day previewing the first two episodes of the upcoming sixth and final season.

Although I jumped from Season 1 to Season 6 without watching seasons 2 through 5 at all, I am here to tell you that, by all appearances, it did not seem as if anything significant had happened in the lives of these characters for all of that time. And yet, here they still are, five years later.