Users Can Respond To Twitter Direct Messages Via Emojis 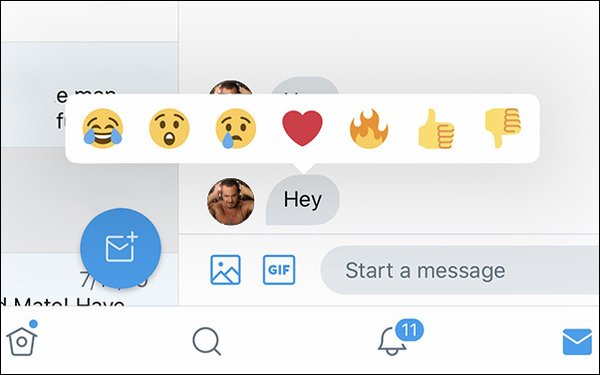 If they care to respond to DMs with emojis, users will need to hover over messages, then click a new reaction button (a heart and plus icon), or double tap on messages and then pick an emoji from the pop-up.

Potentially continuing conversations -- and adding emotional layers to exchanges -- all participants will receive a notification any time a new reaction is added to a message.

Rather than thanking Twitter for the new feature, some users took the launch as an opportunity to comment on what they consider to be the company’s shortcomings.

“Great, great,” one user sarcastically tweeted at Twitter. “There are still Nazis on your site though … That should probably be a priority for somebody.”

From an edit button to a voice message option, some users also responded to the news by noting the many features they desire more than emojis in their DMs. If not to every user’s liking, Twitter continues to make modest adjustments to its popular platform.

Trying to make room for new voices, Twitter recently began deactivating accounts that have remained dormant for at least six months. The effort was expected to give users -- including marketers -- the opportunity to grab handles that were previously accounted for.

Due to a combination of ad product issues and industry headwinds, Twitter reported less-than-stellar third-quarter earnings.

However, the company was still able to post quarterly revenue of $824 million, up nearly 10% year-over-year, along with a 17% increase in monetizable daily active users (mDAUs).

Twitter is expected to report its fiscal fourth-quarter earnings on February 6.