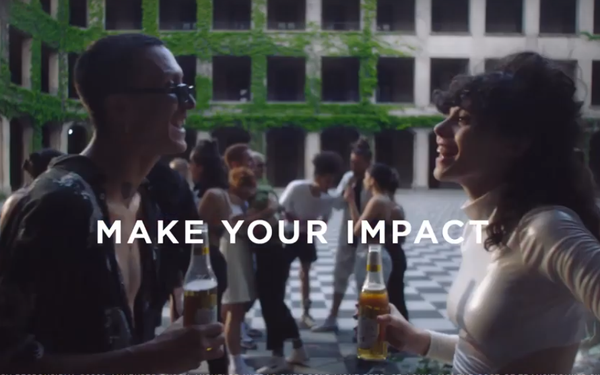 Taken as a whole, the Super Bowl ads coming from Anheuser-Busch InBev tell a story about the world changing around the Budweiser brand,  the most legacy-loaded name in the business.

One of its ads is for Bud Light Seltzer, which it underscores is not beer at all, and another is for the king of beers, Budweiser, which it celebrates as the beverage for ”typical” Americans (though, in Bud’s telling, the typical American is pretty exceptional).

On Monday, its Michelob Ultra Pure Gold beer took another tack by appealing to upscale  health-conscious Americans, who not only drink beer but pay super-premium prices, and will pay more for an organic brew. That’s not the typical drinker -- so far.

In a new "6 For 6-Pack" promotion that will break at the Super Bowl, Michelob Ultra Pure Gold says for every six-pack you buy, the brand will help farmers transition six square feet of farmland into organic land.

The one-minute ad says farmers who want to transition to organic farming “face monumental challenges” -- but continues, “What if we could help them simply by having a beer?”

Ultra Pure Gold, the first nationally distributed organic beer, is getting a Super Bowl boost despite a tiny share of market.

But Michelob Ultra is the current darling in the Budweiser family. Ultra was introduced in 2002, and it claims it is “currently the fastest growing beer brand in the United States by share and the No. 2 beer in the industry by dollar sales.”

Its popularity is aided by its low calorie (85) and low carbs (2.6) attributes. The organic version adds a good-for-the-earth incentive.

"There's an imbalance between consumer preference for organic products and the amount of organic farmland we currently have in the U.S. to support this need," said Azania Andrews, Michelob Ultra’s vice president of marketing, in a prepared statement. That transition process “can be time consuming and challenging without support,” the announcement reads, so Pure Gold will give “a portion of sales” from each six pack to help it along.

There is some fine print that determines how long it takes for farmland to be deemed organic, but three years is the usually agreed upon time.

Right now, less than 1% of American farmland is organic, the brand says, so it would seem to  take some prodigious beer drinking and a lot of time to make a dent.

The seemingly altruistic organic farming effort probably won’t hurt Anheuser-Busch In Bev’s image. A Monday report from the tracking service InfoTrie Sentiment Analysis said headlines about the company have been trending “extremely negative” based on analysis of 6,000 news and blog sites in real time. On a scale of negative 5 to positive 5, the beer giant was at the low end of the measure.

Still most of the stories the tracking service cited were about A-B InBev brand launches. But, negative or not, the stories hadn't received much "buzz" and were unlikely to affect its stock price, according to InfoTrie Sentiment Analysis.