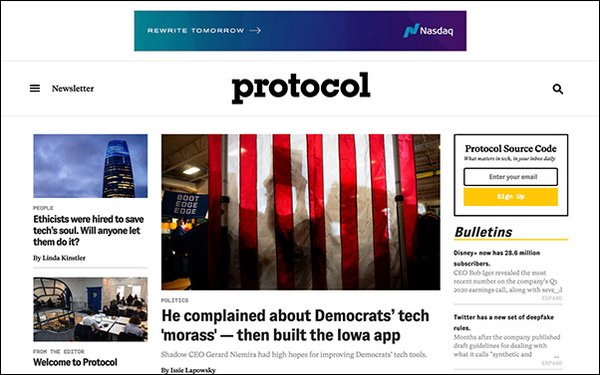 The site, which is a standalone company from Politico, launched without a paywall and counts sponsorships from Nasdaq, Facebook, Postmates, Slack, CLEAR and Excella, each partnering with the site on large-scale integrated campaigns, including digital display and newsletter.

Nasdaq also partnered on an event featuring tech analyst Benedict Evans at the World Economic Forum ahead of the launch.

Ahead of the launch, Protocol was promoted through social media, mainly on Facebook properties and LinkedIn, and through a large OOH campaign in San Francisco. Protocol was also cross-marketed on Politico properties, including digital, print ads, social and email/newsletters.

Protocol is helmed by executive editor Tim Grieve, who spent six years at Politico, and president Tammy Wincup. It is focuses on the three “P”s of tech: “people, power and politics.”

“We’ll bring some of the Politico DNA with us, trying to get beyond the story of the day and bring together back stories that illuminate what’s actually happening,” said Grieve. “We also bring a real commitment to what I call being ‘aggressively fair. The tech space isn’t quite as balkanized in the media space as politics is, but there are aspects of that and a lot of opinion mixed in with journalism in a lot of places. That’s not what we want to do.”

At launch, Protocol’s editorial output includes a website and newsletter, accompanied by a daily briefing also called “Source Code,” and two special features: “Brain Trust,” which gathers experts to talk about a single tech topic, and “Protocol Manual,” a package of stories designed to inform readers quickly about a relevant topic. First up is quantum computing.

Through its editorial mission, Protocol hopes to carve out a new view of tech reporting.

“We’re writing specifically for leaders in tech, other business sectors and public policy who need to understand how tech is changing their industries and society as a whole,” Grieve told Publishers Daily.

“We believe the massive tech companies can shake the world with their every step,” he added. “But, we also believe there are really important stories coming out of other, smaller companies, whether they’re unicorns or startups. We want to pay attention to both the huge companies and also the smaller ones.”