Chili's Promotes On-Premises Dining With 'Out To 'ITA!' Campaign 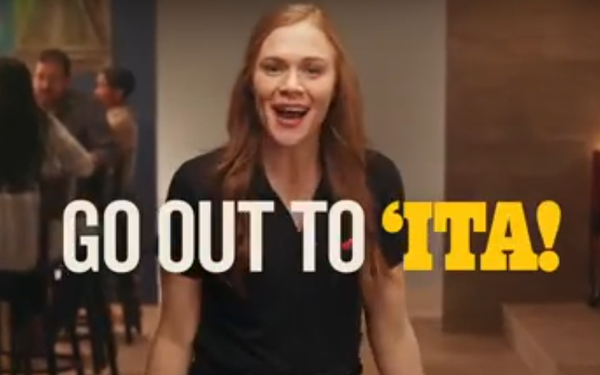 Chili’s is encouraging people to go “out to ‘ITA!” with a new multimedia campaign highlighting fajitas, margaritas and the boisterous togetherness of on-premises dining.

The campaign signals a shift in the chain’s marketing, which for several months had focused on takeout and delivery—the latter of which Chili’s kicked off last summer in an exclusive arrangement with DoorDash.

“As we enter the key season for the casual dining category, we wanted to create a campaign that captures the sensory and emotional experience of dining out at Chili’s… a celebration of food, fun and togetherness,” Amy Rogers, group creative director at O’Keefe Reinhard & Paul, which handled the creative, tells Marketing Daily.

This 30-second television spot introduces the concept of "ITA" (pronounced EAT-ah) by showcasing the sounds of sizzling food, drinks being mixed and families having loud fun. “Hey America, don’t go out to eat. Go out to ‘ITA,” a waitress explains.

The ad ends by promoting the chain’s three for $10 menu offering, which is not available for delivery. Chili’s began advertising three for $10—a starter, main course and soda—with added steak topping at the beginning of January, while pivoting “back into a restaurant message,” Wyman Roberts, president and CEO of Chili’s parent Brinker International, said on Jan. 29 while explaining financial results for the just-ended second fiscal quarter.

In addition to TV, the new campaign leverages radio to convey the sounds of in-restaurant dining at Chili’s. Other media, which are handled by the agency 360i, include paid social and search.

Like many restaurant chains, Chili’s is trying to balance promoting on-premises dining with delivery and takeout. In its just-ended second quarter, comparable-restaurant sales increased 2%, according to Roberts.

“Off-premise was once again the primary sales driver at Chili's, with takeout, third-party delivery and now delivery options on our app and website all contributing,” he noted.

After shifting its messaging in January, “we are off to a strong start in Q3, with sales at Chili’s up over 4% in January,” Roberts added.

Chili’s relies 100% on DoorDash for delivery.

“With regard to Chili's, we don't anticipate delivering ourselves,” Roberts said.