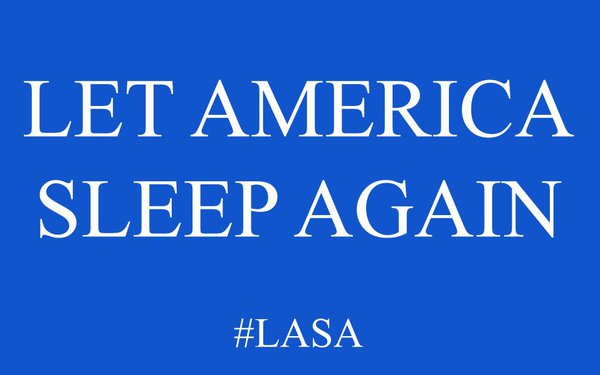 If you’re like me -- and the majority of Americans -- you probably haven’t had many restful night’s sleep the past few years. So today’s column is devoted to letting America sleep restfully again, or in the spirit of grassroots meme movements: #LASA, for “Let America Sleep Again.”

I hope it catches on, because it’s a natural response to an Administration that has done everything it could possibly do to keep us awake at night. It’s also the best possible response to the schoolyard disparagement the President has chosen to label his likely opponent with. You know, “Sleepy Joe.”

Never mind that he has used it interchangeably to disparage multiple self-perceived foes -- everyone from NBC “Meet The Press” host Chuck Todd, to journalist Mark Halperin, to 2016 Republican presidential rival Jeb Bush to famed magazine editor Graydon Carter -- 80 times along on Twitter.

So it seems someone clearly is sleepy, tired, low-energy and unimaginative with it comes to insulting labels. And those who don’t call him out on it are, well, asleep at the wheel.

At first, the label made me lose some sleep, because it made me worry that it might actually be effective in the way it was used to marginalize Jeb Bush in contrast to the chaos candidate’s perceived high-energy. Three years later, I think most Americans are in fact tired, sleepy and ready for a restful alternative.

“I think the message was that the country is, in fact, both hungry for and in sight of a stabilizing force,” presidential historian Jon Meecham said of Biden’s Super Tuesday surge on MSNBC’s “Morning Joe” this morning. “We’ve spent five years on this crazy Constitutional tilt-a-whirl where everybody is exhausted by a president who veers from unthinkable to unthinkable to unthinkable.”

Biden, Meecham surmised, “is a coherent reply of the American people to ‘Who do we want to be President.’”