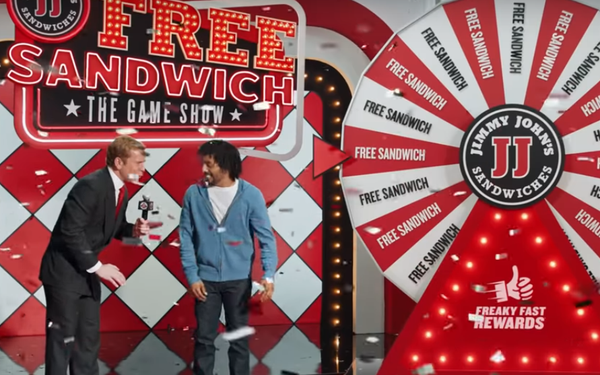 Freaky Fast refers to the Jimmy John’s policy of handling its own deliveries while rejecting third-party services—per its publicly stated No Third-Party Delivery Pledge. The chain has more than 2,800 U.S. locations.

Based on the free, eight-inch sandwich giveaway after each new loyalty member’s first order, the campaign reinforces the concept that everyone is a winner.

In this video, a contestant on the fictitious “Free Sandwich, The Game Show” anxiously spins a giant carnival wheel—each notch of which awards a free sandwich. Of course, he wins.

“Incredible! Another winner!” exclaims the show host. “What are you going to do with your sandwich?”

Contestant: “I’m going to eat it!”

Matt Talbot, chief creative officer of Jimmy John’s agency WorkInProgress, calls it “the least tension-filled game show of all time. Just like with Freaky Fast Rewards, if you place an order, you’re earning a free sandwich.”

The campaign will run on many major television networks and was to begin during regional coverage of the NCAA men’s basketball tournament, which was canceled this week because of the COVID-19 pandemic. Digital video includes Hulu, YouTube, Sling and all major social media platforms.

According to mobile data and analytics provider App Annie, Jimmy John's had 8.2 million U.S. downloads on iOS and Google Play as of March 11.

“Loyalty programs, when coupled with free giveaways, can drive significant traffic to a QSR or fast casual app,” Lexi Sydow, senior market insights manager at App Annie, tells Marketing Daily. “We’ve seen this pan out with McDonald’s and Chick-Fil-A, and have seen strong growth in the user base for Jimmy John’s sandwiches’ app in recent months.”