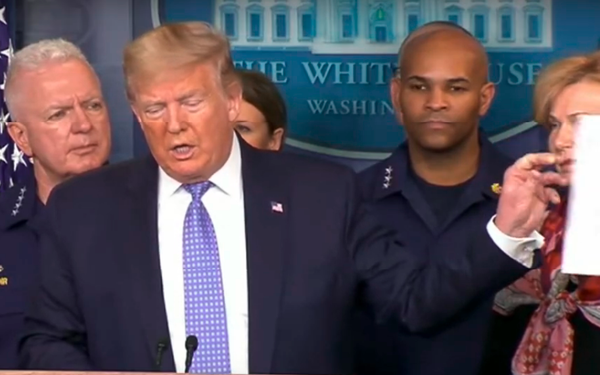 The scariest part of the President's idiosyncratic method at distorting the truth and gaslighting us, is when he doubles down in spite of empirical evidence that he is lying. Scarier still is when he does it while conveying information vital to our national health and security.

That's what he did Sunday when he began a press briefing updating the nation on our national health emergency by attacking the press for correctly setting the record straight when, during a press briefing on Friday, he misrepresented that the White House was working with Google to launch a new website that would help triage Americans for the COVAD-19 infection.

The press reported it wasn't Google that was developing the website, but Verily Health Sciences, a sister company of parent Alphabet Inc., that said it was going to roll it out as a limited test in the San Francisco Bay Area.

Google's own communications department immediately tweeted this statement below saying just that, moments after the President misinformed the American public.

It should have been a small lie for the President -- just a misstatement, really -- but then he chose to double down and make it a really big lie by trying to bend reality and reshape the truth.

It's one thing to do that when boasting about the size of your inauguration audience. It's quite another thing to do it when trying to calm the nation's anxiety about a pandemic threat by conveying reliable and credible information.

By doubling down and refuting the press' factual accounts, as well as Google's and Verily's own statements, the President has managed to magnify what should have been an innocent and relatively benign error into a full-blown gaslighting attack on all Americans during a time of genuine crisis.

What troubles me most about the way he handled it was the way he used a prop as evidence.

"I want to thank the people at Google and Google Communications because, as you know, they substantiated what I said on Friday," the President asserted, brandishing a piece of paper that ostensibly was his proof.

He then referred to the "head of Google" as a "great Gentleman," whom he said "called us and apologized."

"I don't know where the press got their fake news, but they got it from some place," the President continued, clasping the piece of paper between his fingers and adding, "As you know this is from Google. They put out a release and... uh... ," and then he proceeded to chuck it off to his side like it was a hot potato.

It gave the impression that prop disgusted even him.

"You guys can figure it for yourselves how that got out and I’m sure you’ll apologize," the President continued, then adding most ironically of all:

"It would be great if we could really give the news correctly. It would be so, so wonderful."

I am going to assume that he used the pronoun as the "presidential we," and was actually referring to himself and/or his White House, because it's clearly not what the truth was.

The statement posted by Alphabet and Google CEO Sundar Pichai on Sunday confirmed the site the President misstated about Sunday was in fact a test by Alphabet's Verily Health Sciences division (see below).

18 comments about "'It Would Be Great If We Could Really Give The News Correctly'".
Check to receive email when comments are posted.
Read more comments >
Next story loading