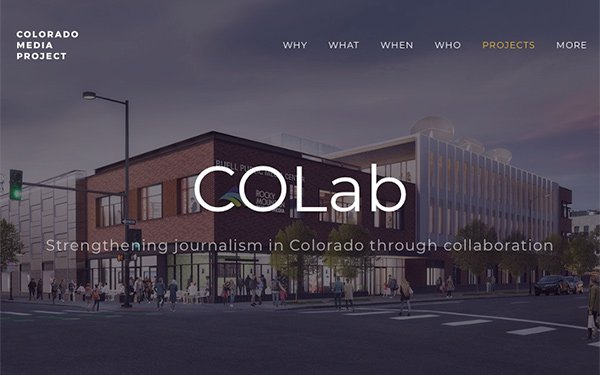 Colorado newsrooms are working together to cover COVID-19.

A coalition of over 40 print, TV, radio and digital outlets will share news coverage of the pandemic to coordinate and avoid duplication, maximize resources, facilitate wider distribution of stories and collaborate on data-driven accountability journalism.

That's according to the group, called the Colorado News Collaborative, or COLaB.

“There has never been a more critical time for us to put collaboration above competition, to ensure that our children always have access to strong and independent local news,” stated Jill Farschman, CEO of Colorado Press Association.

The COLab’s first network, Misinformation Watch Colorado, launched in March to help the state's newsrooms and community members eradicate misinformation around topics like COVID-19, the 2020 Census and the 2020 elections.

As of March 31, more than 20 newsrooms are participating.

CoLab includes two of the largest newsrooms in the state: The Denver Post and Colorado Public Radio.

The Associated Press is working with nearly two dozen Colorado news organizations to use its "StoryShare" tool, which allows newsrooms to share content and coverage plans, Axios reports.

According to The Colorado Independent, the feature could come to the state soon.

Melissa Davis of the Colorado Media Project told The Colorado Independent they were seeing some duplication of coverage.

With CoLab, news orgs can talk more “about who’s covering what and opportunities for even more in-depth collaboration to do deeper dives or to make sure that we’re asking ourselves: Are there areas of the state or communities that aren’t being heard from or aren’t being covered?”

Other states have kick-started similar initiatives. In North Carolina, 22 newspapers are working together to share statewide news as part of the North Carolina News Collaborative.

Newsrooms in Pennsylvania are working together to cover state government. In Oregon, organizations have teamed up to cross-promote COVID-19 coverage.

In other Colorado media news, the Aspen Daily News asked readers for financial support for the first time in the newspaper's 42 years. Its rival Aspen Times is also appealing to readers for contributions to support the publication.