The Promise Of Free Beer Becomes Pandemic Tradition -- Not Annual, We Hope 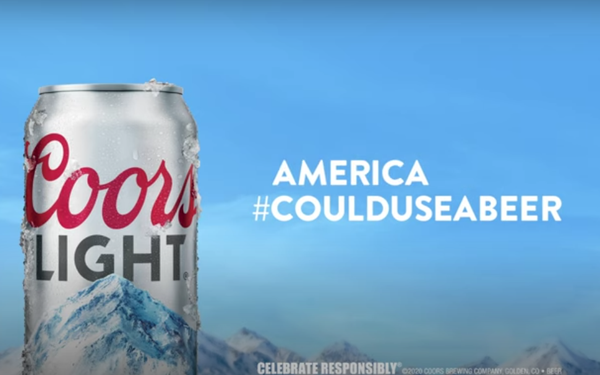 In these uncertain times, it appears the trending marketing mode by beermakers is to give it away.

The latest:  Coors Light has extended its “Made To Chill” campaign by inviting consumers to share a beer by going to @CoorsLight and providing the name of someone who needs a bottle (or six). Coors Light will give those named a rebate certificate so they can buy a sixpack and be reimbursed for it.  The  #CouldUseABeer campaign promises $1 million of free beer.

Prime-time ads featuring the voice of actor Paul Giamatti recalls the tough American times in which, in this telling, beer helped us get through it all, as it will  even through the current scenario with its “sucky, suck, sucky suckiness of historical proportions.”

This promotion comes on the heels of a Coors Light promotional bullseye a few days ago in which the beer brand made a showy delivery of Coors Light to a 93-year-old Pennsylvania woman who flashed an “I Need More Beer” sign in her window. That photo went viral and Coors Light got to work delivering, delivering “a stack of 15-packs of her beloved Coors Light.”

The free beer idea added another chapter when Pottsville, Pennsylvania’s Yuengling Beer, a major brand in the Northeast and officially the largest craft brewer in the nation, got into the act. A big beer truck showed up at the Lehigh Valley Hospital a couple days ago, and gave away a reported 300 cases of its new Flight low-alcohol beer to the facility’s 1,200 workers over the age of 21.

Earlier in the month, the venerable Miller’s High Life brand proposed the “Wedding at Your Doorstep” promotion, giving a chance for three couples to win a lavish-as-it-can-be wedding, social-distance style, held in their frontyards.  The winners get “a licensed officiant, photographer and food.” And free beer, of course.

High Life  will also handle a video call allowing family and friends to join in, and a really swell wedding gift: $10,000 for each of the lucky couples.

“As the Champagne of beers, Miller High Life has a long history of being the Champagne for everyday life, and a proud part of weddings and celebrations,”  said Lucy Bloxam, High Life’s associate marketing manager, in a prepared statement.

Earlier, Anheuser-Busch InBev promised a year’s worth of free Busch beer to couples who had to postpone their lucky day. The brand says it will pick 250 winning couples.

Before that, Busch gave away free beer three months of free beer to the first 500 people who would adopt a dog from a Minneapolis shelter. .

The stunt promotions may obscure the fact that beer brands are like ducks out of water these days without the sporting events where they do much of their advertising, and without bars, where they normally do a lot of their selling.