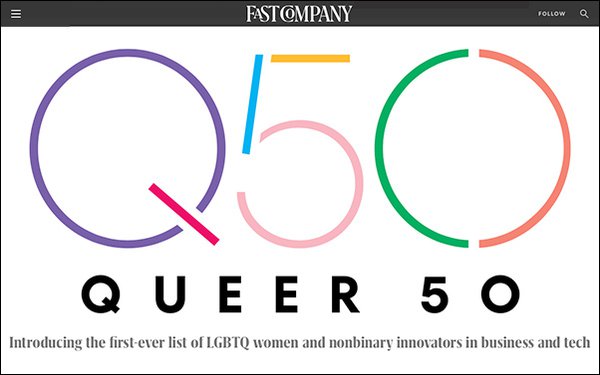 Fast Company has created a list celebrating LGBTQ women and nonbinary innovators in the business and tech sectors.

The “Queer 50” list was produced in partnership with Lesbians Who Tech & Allies, the world’s largest LGBTQ technology network.

Fast Company claims it is the first list of its kind — a publisher recognizing LGBTQ women and nonbinary innovators who hail from the tech, finance, venture capital, media and entertainment industries.

The list comes just ahead of Pride Month, which is held in June to commemorate the 1969 Stonewall riots that sparked the gay rights movement.

Other publishers, such as Condé Nast's LGBTQ+ brand Them., also have initiatives planned around Pride month.

Them. is hosting “Out Now Live,” a virtual Pride celebration on June 22. It will include performances, speeches and storytelling from prominent members of the LGBTQ+ community and allies.

“With in-person events being postponed and canceled around the world, we as a global LGBTQ+ community will be expressing, honoring and celebrating Pride in an entirely new way," stated Whembley Sewell, executive editor of Them.

“Out Now Live” will broadcast across Them.'s platforms and YouTube Live.

Them. will team with Condé Nast brand Pitchfork to curate musical performances for “Out Now Live.”  Rapper Princess Nokia is among the acts that will be performing.