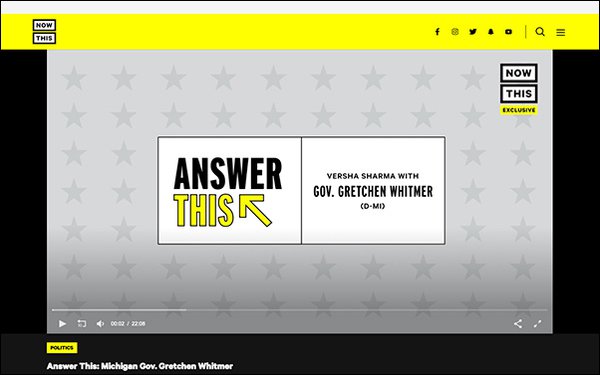 NowThis is expanding its Vote 20 political coverage with a new interview series called “Answer This.”

The first episode, which launched yesterday, features Michigan Gov. Gretchen Whitmer, who discussed the COVID-19 pandemic and the government’s response to it. She also addressed police brutality, the death of George Floyd and the subsequent protests and civil unrest.

Future episodes will feature other governors who have emerged as important voices during this national moment, as young people become more invested in local and state level politics.

The series, which is produced remotely, is hosted by NowThis senior correspondent-managing editor Versha Sharma.

During the course of the interview, which took place just before Whitmer joined President Trump’s phone call with governors, she spoke out about the president’s recent tweets related to nationwide protests.

“I think that in this time, when this country has so much pain, it is so important that we have all leaders speaking to our mutual interests of hope and justice and security and the fact that there is none of that coming out of the White House," Whitmer said. Pointing to Trump's tweets, she added they were "inflaming the situation.. I really think that it's unconscionable.”

Whitmer also used the interview as a chance to call for the accountability of all four of the officers involved in the death of George Floyd. She offered her support for the nationwide protests.

Whitmer stated: “This is historic pain that has come to this point and driven us to this point. And all of that being said, you know, the protests by the organizers has largely been peaceful. You know, they're there for the legitimate, righteous reason of simply wanting to be treated equally under the law and safe in communities. And they’re right. And I stand with them.”

“Answer This” builds on NowThis’ efforts throughout the 2020 election cycle, which saw the outlet interview every major Democratic presidential candidate, including Joe Biden, Elizabeth Warren, Bernie Sanders and Pete Buttigieg early in its coverage.