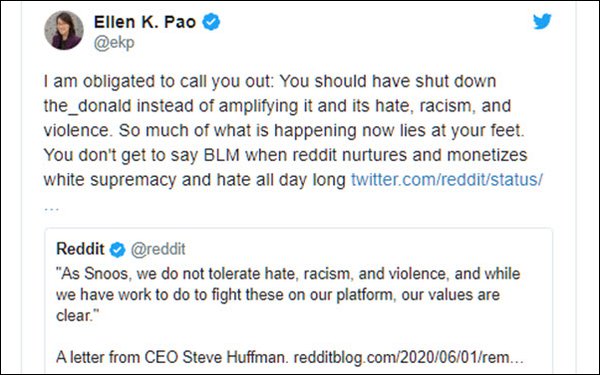 Ellen K. Pao, the former CEO of Reddit, has called out the current CEO, Steve Huffman, accusing him of hypocrisy in regard to a note to employees that he posted on the company's blog and tweeted.

In the post, he states that Reddit "Snoos" (the nickname for the company's employees/management, based on the name of its alien mascot symbol) "do not tolerate hate, racism, and violence."

"While we have work to do to fight these on our platform, our values are clear," he adds.

Pao, who was interim CEO of Reddit from late 2014 to mid 2015, retweeted a link to Huffman's post along with her response: "I am obligated to call you out: You should have shut down the_donald instead of amplifying it and its hate, racism, and violence. So much of what is happening now lies at your feet. You don't get to say BLM [Black Lives Matter] when reddit nurtures and monetizes white supremacy and hate all day long https://twitter.com/reddit/status/.

"A number of tech companies are contributing to an outpouring of public support for the Black Lives Matter movement following the death of George Floyd at the hands of a Minneapolis police officer last week," notes CNET. "But with that outpouring is coming a backlash from critics who say some of these companies haven't played an active role in quashing racism in the past, or have even allowed it to flourish."

Pao, who founded and now serves as CEO of Project Include, a nonprofit that advocates diversity in the technology industry, has frequently criticized social media for not doing enough to stop the spread of hate and harassment on their platforms, including calling out Reddit for the group-trolling associated with The_Donald subreddit.

Pao has been the subject of social harassment herself, including after she banned some of Reddit's most abusive subreddits while CEO, and after she filed a sexual discrimination and harassment suit against venture capital firm Kleiner Perkins Caufield & Byers, where she was a partner. That suit, while ultimately unsuccessful, has been described as contributing to the start of the #MeToo movement.