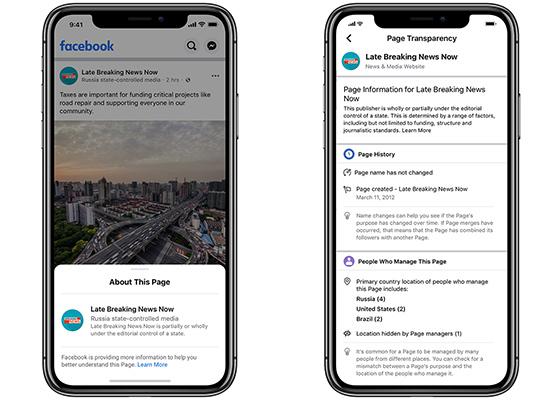 Ahead of the next U.S. election, Facebook is planning to ban ads from state-controlled media outlets.

Beginning this summer, the tech titan will no longer allow such ads to appear on any of its platforms, according to Nathaniel Gleicher, head of Cybersecurity Policy at Facebook.

Although he said such ads are rare, Gleicher writes in a new post that Facebook is acting “out of an abundance of caution to provide an extra layer of protection against various types of foreign influence in the public debate ahead of the November 2020 election.”

In addition, Facebook has started labeling state-controlled media outlets as such.

“We’re providing greater transparency into these publishers because they combine the influence of a media organization with the strategic backing of a state, and we believe people should know if the news they read is coming from a publication that may be under the influence of a government,” Gleicher explained.

Beyond merely assessing financial control or ownership, Facebook’s definition of state-controlled media includes an assessment of editorial control exerted by a government.

To conduct such assessments, Gleicher said that Facebook is relying on approximately 65 experts in the areas of media, governance, and human rights and development.

“Based on these consultations and research, we developed our own policy criteria to determine whether a publisher is wholly or partially under the editorial control of a government,” according to Gleicher.

Such factors include the publisher’s mission statement and how it is achieved; ownership structure and disclosures of direct or indirect ownership; editorial guidelines; sources of funding and revenue; and governance and accountability mechanisms.

Facebook’s failure to prevent foreign interference in the run-up to the 2016 primaries and presidential elections was well documented.

Since then, the social giant has rolled out numerous changes to its services and policies, along with hiring hundreds of additional content moderators.

For example, it has required advertisers to seek authorization before running ads about social issues, elections or politics since 2018, while it has insisted that Pages disclose the source of funding behind political ads since 2017.

Yet, despite these efforts, nearly three in four Americans (74%) said they had little or no confidence that Facebook and other social networks could prevent the spread of political misinformation, earlier this year.

According to a report from the Pew Research Center, nearly eight in 10 Americans believed Facebook, Twitter, and other networks were responsible for stopping the spread of such misinformation.

Pew found almost identical shares of Republicans and Republican-leaning independents (76%) and Democrats and Democratic leaners (74%) had little or no confidence in the ability of top networks to prevent the misuse of their platforms in the upcoming election.