Wrapping The President In The Flag: No, Not That One 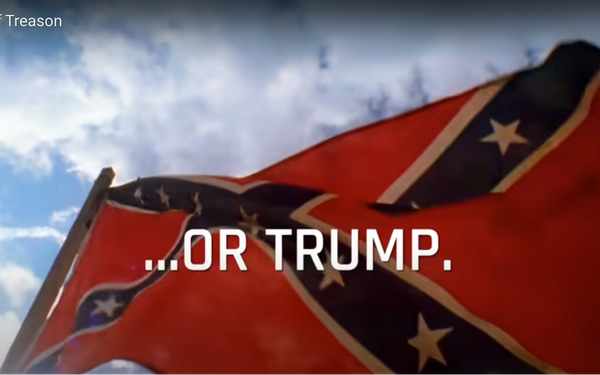 As bad as this past week has been in terms of social unrest, I'm preparing for a long, hot summer, because chaos is the only strategy a despotic President has left for holding onto power. While it's a good sign that the Justice Department's secret police force reportedly is being removed from the streets of Washington, D.C., as his support and his "ratings" continue to erode, the despot will become increasingly desperate. I fear he wants to spark a modern day Civil War by dividing, not uniting our states even further.

That's the subtext of a new spot from the marketing masterminds at The Lincoln Project that wraps the President in the flag. No, not the American flag -- the Confederate one.

The spot utilizes the Confederacy's flag as an emblem of "treason" against America, and asks "why it keeps showing up at events supporting Donald Trump." And why he calls those who carry it, "very fine people."

The spot concludes by asserting, "For us, it says this is a time for choosing... America... or Trump."