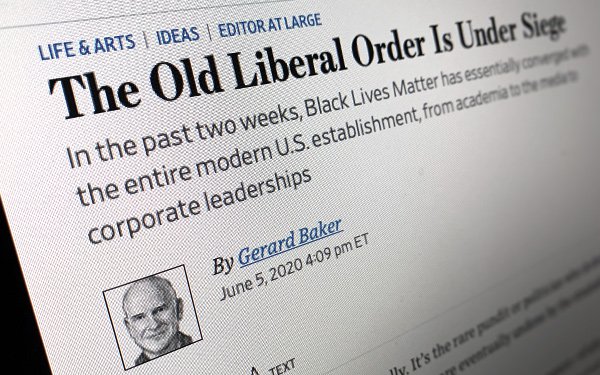 editor at large Gerard Baker has moved to the Opinion staff.

The shift comes after a complaint letter from the board of the Independent Association of Publishers’ Employees, the union that represents Wall Street Journal employees, was sent to the heads of the newsroom. They include editor in chief Matt Murray and Almar Latour, who recently became publisher of the Journal and CEO of parent company Dow Jones.

The letter claims, according to The New York Times, that Baker violated rules governing the news department. Baker was previously editor-in-chief of the Journal before he stepped down in 2018 and Murray took his place.

The union specifically took aim at Baker’s Twitter use and his weekly opinion column “Editor at Large.” It criticized a May 15 column headlined "The Often Distorted Reality of Hate Crime in America,” for example.

News staffers at the Journal are reportedly not allowed to contribute opinion essays to other publications, but Baker has published columns at the Times of London.

The Opinion staff is led by editorial page editor Paul A. Gigot; it operates separately from the news department.

Separately, WNYC has named Audrey Cooper editor in chief. She will lead the company’s entire local news operation, including WNYC radio and the Gothamist site, as well as local talk shows “The Brian Lehrer Show” and “All of It.” She takes her post July 20.

Coopercomes from The San Francisco Chronicle, where she has served as editor in chief since 2015. She was the youngest woman to ever run a major American newspaper and the first woman to run the Chronicle, according to a statement.

In a note to staff, Cooper said hiring more people of color for the WNYC newsroom is her “first priority.”

“WNYC does not have enough black and brown people in the newsroom,” she wrote.

Over the last two years at the Chronicle, Cooper says she has hired 46 people and 41 of them were people of color, women and/or LGBTQ-identified journalists.