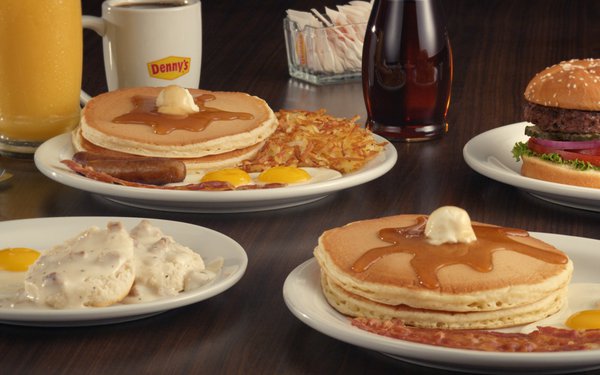 Add Denny’s to the list of restaurants trying to tempt diners with lower prices. The company says it is relaunching its famed $2 $4 $6 $8 Value Menu, celebrating its 10th anniversary.

The emphasis on good deals comes as many companies move toward reopening, recognizing that making customers feel safe is only part of the post-pandemic solution. No one is sure yet how comfortable consumers will feel about returning to pre-virus restaurant spending habits.

The Spartanburg, South Carolina-based company says the limited-time offer is available for dine-in, takeout and delivery. And it’s sweetening the deal with free delivery through Denny's on Demand.

Like all restaurants with significant sit-down business, Denny’s has gotten walloped during the pandemic, but observers are encouraged by its recovery. In its most recent report, same-store sales were down about 68%, compared to a decrease of 80% in late March. Dine-in service was off 68%, while off-premises sales were up 105%, “which we view as encouraging,” writes Michael Tamas, who follows the company for Oppenheimer. As of mid-May, the company had about 82% of its restaurants open.

“Denny’s has taken many steps to blunt the impact of COVID-19, ranging from cost savings, adapting to the carry-out/delivery surge, and reducing capital needs," according to Tamas. "We believe the stock can recover as virus fears disappear and the system reopens.”

And while others see pockets of resilience in the restaurant industry overall, there’s a possibility business will continue to be weak in the second half of the year.

A new report from Baird, which tracks monthly restaurant revenues, says that in May, comparable sales in its index fell 14% from the prior year, compared to the decline of 31% in April. “The improvement from April was broad-based,” writes Baird analyst David Tarantino. Fast-casual chains were off 15% in May, compared to 35% in April, and casual dining was down 64%, after a 75% drop in April.

While Baird notes that everything from heightened unemployment benefits, stimulus payments and the gradual reopening of restaurant dining rooms are all helping restaurants recover, there are still plenty of doubts about how people feel about family finances.

Baird sees risk for a tougher consumer spending backdrop through 2020. “While we expect further improvement in restaurant industry comps in June-July as dining rooms continue to reopen, we also expect the employment losses experienced during the COVID-19 shock to lead to recessionary pressures on consumer spending in the second half of the year.”

Without more government stimulus, “we see risk that the recovery in aggregate spending in restaurants could begin to stall after July, potentially leading to sales disappointments for concepts that are most sensitive to pullbacks in discretionary spending,” especially for Starbucks and casual dining chains, according to Baird.