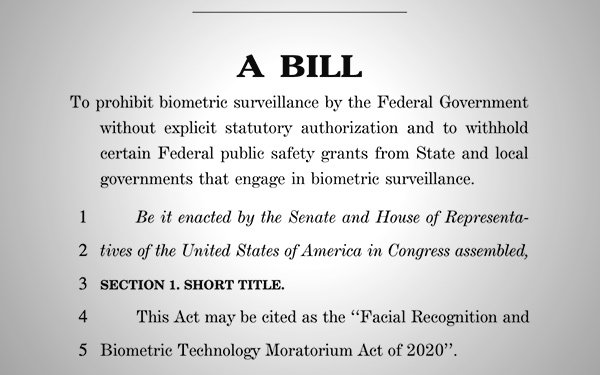 Four federal lawmakers have unveiled a bill that would prohibit federal law enforcement agencies and other government entities from using technology that identifies people based on biometric -- including faceprints, voiceprints and gaits.

Civil rights advocates have long expressed concerns that facial-recognition technology will effectively end people's ability to appear outdoors -- at protests, political events, or other public spaces -- without revealing their identity to the government.

“The threat that facial recognition poses to human society and basic liberty far outweighs any potential benefits,” Evan Greer, deputy director of digital rights group Fight for the Future, wrote last year in a column for BuzzFeed. “It’s on a very short list of technologies -- like nuclear and biological weapons -- that are simply too dangerous to exist, and that we would have chosen not to develop had we had the foresight.”

In addition to privacy issues, there are also concerns that the technology is inaccurate -- especially when identifying minorities.

Markey and the other bill sponsors noted Thursday that the National Institute of Standards and Technology recently reported that Black, Brown, and Asian individuals were up to 100 times more likely to be misidentified than white male faces.

“Facial recognition technology doesn’t just pose a grave threat to our privacy, it physically endangers Black Americans and other minority populations in our country,” Markey stated Thursday. “In this moment, the only responsible thing to do is to prohibit government and law enforcement from using these surveillance mechanisms.”