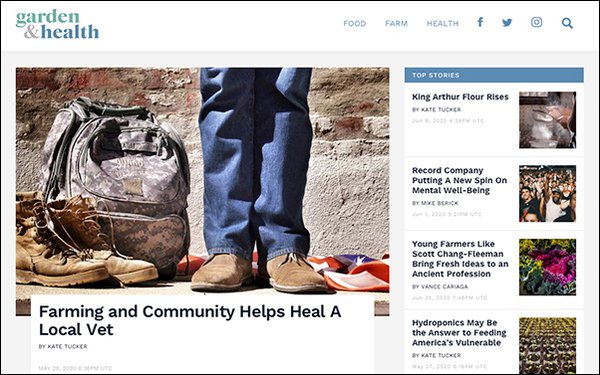 The Business DownloadandGarden & Health will publish positive stories of innovation and sustainability in those categories.

The Business Download will feature stories on local companies and individuals. Garden & Health will focus on American food, agriculture and health. The goal is to reach audiences that are not often represented in traditional publications.

The company is led by Conor Gaughan, who serves as publisher. He spent nearly 20 years in digital media, first in finance and investment banking, and more recently ran a digital media strategy firm.

Gaughan told Publishers Daily he noticed a “giant space” in digital media for stories “not about anger or fear.”

“I was tired of all the negative headlines,” Gaughan said.

Gaughan wants to build a media organization that “highlights communities, leaders and businesses looking to a sustainable future, to find pragmatic solutions.”

While Gaughan couldn’t predict launching the company during a global pandemic and social uprising, he is seeing the opportunity during a time of “profound social and cultural change. It’s a transformational moment.”

People are tired of fights on Facebook, he added. “Now more than ever, people want uplifting and inspiring stories” around common values that unite and inspire Americans.

Many digital publishers, he added, were launched after the last recession.

For The Business Download, Gaughan does not want to tell stories about startups in Silicon Valley, but rather a local business in Des Moines, for example.

“We’re looking for topics that matter to our communities. We’re interested in telling those local stories that bring us together as a nation. We’re working to educate and empower, not belittle or patronize,” Gaughan wrote in a letter posted on the company’s website.

The business will start off with traditional digital advertising and monetization opportunities, Gaughan said.

“We are still very much in the hiring process. Now is a good time to be in the market for great talent,” he noted, citing the widespread layoffs in the media industry this year.

Gaughan’s goal is to have 25 full-time employees by the end of the year.

Consensus plans to launch more publications throughout 2020. Two are planned to go live by the end of the third quarter, and another two by November.