Political ad spending — headed for another record — is a bright spot for out-of-home media. Kantar tracking service says political spending on out-of-home ads was up 75% in the first four months of 2020 compared to the same period of 2018. 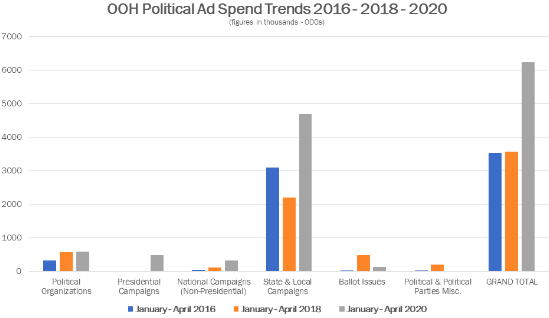 This uptick fits into a broader context:

Overall, out-of-home media is a small — but growing — fraction of political ad spend. Buyers are drawn to OOH to boost name identification, for branding, to generate publicity, drive social media, and because of favorable cost-per-thousand pricing. 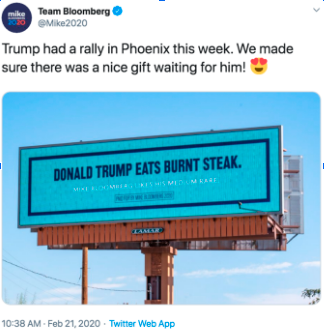 Out-of-home ad spending is divided between candidates and groups seeking to affect political outcomes. For example, presidential campaigns bought billboards in Iowa, followed by the Bloomberg 2020 campaign trolling President Trump with snarky one liners. In Scranton, PA, supporters of Joe Biden for President greeted Trump’s visit with a well-placed message on a digital billboard: “Scranton is Joe Biden Country!” 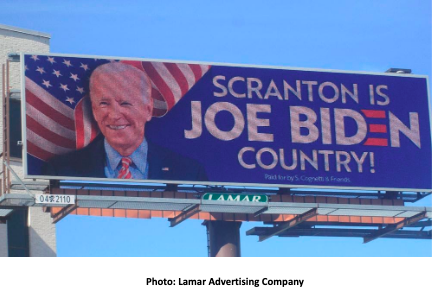 The “earned media” for these ad placements was global, as news coverage and social media buzz amplified the message to millions.

Both sides of a political argument can be debated on billboards in the same market.  Soon after Senator Mitt Romney (R-UT) voted to convict President Trump of abuse of power – the only Republican senator to do so – a billboard appeared along Interstate 15 in Utah praising Romney as a “patriot.”

In response, critics of Romney opened a GoFundMe account in order to express their opposite views, that Romney should resign.

In sum, billboards and other out-of-home formats mirror topics of the day... what people talk about and tweet. In some cases, the billboard is a tweet, posted by Twitter. 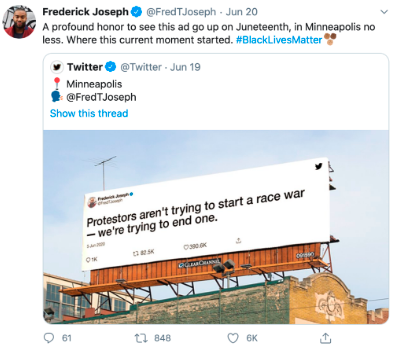