Meredith To Launch 'Reasons For Hope In America' Campaign 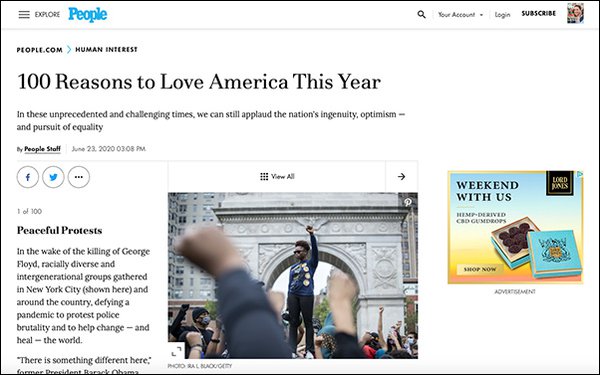 Meredith Corp. is launching a company-wide, cross-platform editorial initiative this fall in response to the difficult events this year, called “Reasons for Hope in America.”

The project will focus on the “inspiring stories of community, giving thanks, inspiring change and reflecting on what matters most,” according to the publisher.

"Reasons for Hope in America" — which will span across print, digital, video, broadcast and social — is inspired by the People franchise “100 Reasons to Love America.”

“As we continue to persevere through the C-19 pandemic and address racial inequality and justice in our own communities and throughout the country, we believe this campaign will strike a chord with our more than 190 million American consumers and our advertising partners,” stated Doug Olson, president of Meredith Magazines.

“Reasons for Hope in America” will combine editorial with custom content. Meredith’s studio The Foundry will work with brands to produce custom print and digital content for the initiative, highlighting company initiatives or figures that have had an impact on the country’s response to the crisis, or taken action to promote equality and diversity.

Meredith brands will introduce the project in the November Editor’s Letter and promote across each brand's platforms.

The publisher will also create a cross-branded, 16-part video series around the campaign. Episodes will run under 10 minutes and profile individuals, businesses and organizations across the U.S. making a difference in communities.

Meredith’s Local Media Group, which is made up of 18 local TV stations, will launch a five-month campaign around “Reasons for Hope in America.”