With Air Travel At A Low, American Says 25,000 Jobs Are In Jeopardy 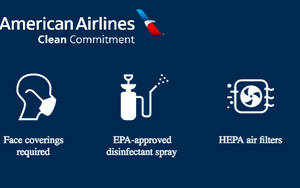 With demand for air travel not rebounding from the impact of the pandemic anywhere near as rapidly as American Airlines expected it might, the Dallas-based carrier yesterday warned employees that 25,000 of them could be out of work in October.

“The pandemic has caused a rout for air travel deeper and more persistent than almost anyone anticipated. Executives expect it could take years for travel demand to return to its 2019 highs. Meanwhile, airlines are grappling with how deeply to make cuts to hold on to enough cash to survive,” Alison Sider reports  in The Wall Street Journal.

“American’s cuts would fall most heavily on flight attendants, with nearly 10,000, or 37%, getting notices of potential furloughs -- the industry’s preferred term for layoffs of workers who have rehiring rights. About 4,500 ground workers, 3,200 mechanics and 2,500 pilots will get notices,” the AP’s David Koenig writes.

“‘It’s brutal,’ said Dennis Tajer, a pilot and spokesman for the union of American’s pilots. ‘This puts the number on how serious the virus is for airlines and our economy,’” Koenig continues.

“CEO Doug Parker and President Robert Isom outlined the job cuts in a letter Wednesday to employees at the Fort Worth-based airline, saying the COVID-19 downturn means there will likely be less flying this fall and the airline will be overstaffed,” Kyle Arnold reports  for the The Dallas Morning News.

“American has already cut back its management and support staff by about 5,000 workers through a mix of involuntary and voluntary layoffs,”  Arnold adds.

American’s revenue in June was down more than 80% a year ago, Parker and Isom reported in their letter.

“And with infection rates increasing and several states reestablishing quarantine restrictions, demand for air travel is slowing again,” they wrote.

“An average of about 672,000 people a day passed through Transportation Security Administration checkpoints in the first two weeks of July, down 73% from the same period a year ago,” Leslie Josephs points out  for CNBC.

“Just because American is sending 25,000 WARN notices does not mean that all 25,000 employees will see a guaranteed furlough. Before then, the airline will be working with its unions to reduce furloughs by offering extended leaves and early-outs. In addition, the travel demand situation may change so that the airline would need to furlough fewer than those numbers,” Jay Singh points out for Simple Flying.

“Last week, United Airlines said it could furlough as many as 36,000 workers in the fall,” Niraj Chokshi writes  for The New York Times, pointing out that Delta Air Lines and Southwest Airlines have warned about making similar cuts.

“Passenger airlines were able to avoid draconian cuts after Congress passed the CARES Act in March, which set aside $25 billion to help the companies pay workers, provided they refrain from substantial cuts through Sept. 30. American was the largest recipient, receiving $5.8 billion in mostly grants and some loans. Delta Air Lines received $5.4 billion and United received $5 billion,” Chokshi adds.

The terms of that package “ban airlines from forced job cuts before October, and under the Worker Adjustment and Retraining Notification Act they are required to provide 60 days' notice of mass layoffs,” Reuters’ Tracy Rucinski writes  for Yahoo Finance.

Delta this week reported  that “17,000 employees had agreed to depart the company and that thousands more had signed up for unpaid leaves of absence. Chief executive Ed Bastian told analysts and investors he was hopeful Delta would be able to avoid furloughs altogether through similar voluntary programs,” the WSJ’s Sider writes.

“Parker and Isom said the airline supports efforts by employee unions calling on Congress to extend the Payroll Support Program through March 31, when 'there would most certainly be more demand for air travel, and along with that demand, much less need for involuntary furloughs throughout the industry,’” Lori Aratani writes  for The Washington Post.

“There appears to be at least some support for such a measure among Democrats. Rep. Peter A. DeFazio, (D-Oregon), chairman of the House Transportation and Infrastructure Committee, and other lawmakers this week began circulating a letter seeking support for an extension of the program,” Aratani adds.

airlines
1 comment about "With Air Travel At A Low, American Says 25,000 Jobs Are In Jeopardy".
Check to receive email when comments are posted.
Next story loading