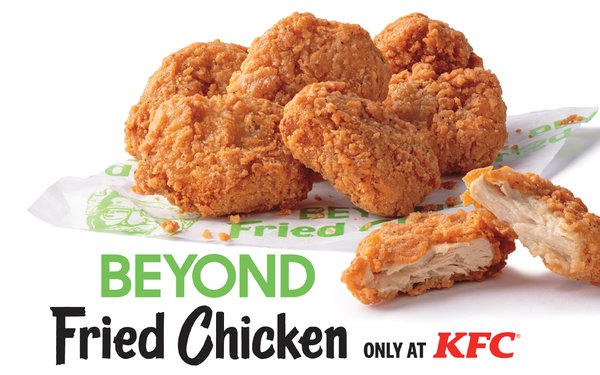 Hearing about chicken nuggets made with a 3D bioprinter doesn't make me want to lick my fingers, but it’s hard not to be impressed by KFC’s latest announcement. The goal? The world’s first lab-manufactured chicken nuggets.

With the world clamoring for meat alternatives, the company says its latest in the quest for “restaurant of the future” is a deal with the Moscow-based 3D Bioprinting Solutions research laboratory. The new nuggets will be ready for a taste test this fall.

The process involves additive bioprinting technology that uses chicken cells as well as plant material, approximating the taste and texture of chicken meat, with “almost no animal involvement.”

KFC, a subsidiary of Yum! Brands, is also pushing the Beyond Fried Chicken test of its plant-based collaboration with Beyond Meat. It initially launched the product in a one-day pilot last summer in Atlanta, when it sold out in less than five hours. Further testing in February, in the Nashville and Charlotte markets, also got “an overwhelmingly positive consumer response.”

The new offer puts the Beyond Fried Chicken in some 50 select KFC restaurants in the Los Angeles, Orange County and San Diego markets. “We know the East Coast loved it, so we thought we’d give those on the West Coast a chance to tell us what they think in an exclusive sneak peek,” says Andrea Zahumensky, chief marketing officer, KFC U.S., in its announcement.

KFC’s commitment to meat alternatives is just further evidence that the trend, once seen as appealing only to hard-core health food devotees and fringey vegetarians, appeals to a broader base interested in sustainability, and the complexities of meat.

Burger King, for example, besides its bold bets with the Impossible Whopper, is making issues of better meat production part of consumer conversations with its adorable ad about cow farts.)

Impossible Burgers and 3D chicken are just the start, and, inevitably, we’ll soon be munching on all manner of human-engineered protein, with companies like Novameat exploring pork-like products and Redefine Meat Ltd. hunting for the perfect steak.

Even before the pandemic shook up the world’s meat supply chain, analysts had high hopes for the category. Last summer, Barclays Plc estimated that fake meat sales would grow to $140 billion in 2029, and its research found that -- at least in the U.K. -- 92% of those eating these products aren’t vegetarians, but flexitarians.

And COVID-19 continues to accelerate the trend, not just opening people’s minds to new products, but reinvigorating brands like Tofurky and Conagra’s Gardein.