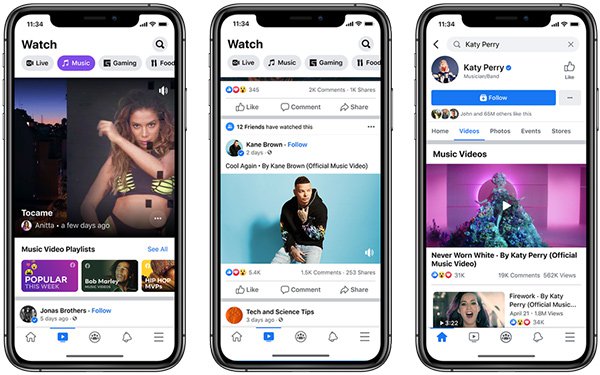 Terms of the deals have not been revealed, but Facebook is likely paying a hefty sum. Google said it paid the music industry more than $3 billion last year in exchange for streaming its content on YouTube.

Seeking a competitive advantage over YouTube and other platforms, some of the deals give Facebook the privilege of premiering videos on its platform.

“We’re creating new social experiences that are about more than just watching the video,” Hrivnak and Raji stated.

For example, Facebook plans to use Live, Stories and fan Groups to generate buzz for a forthcoming video by Panamanian R&B singer Sech before its exclusive release.

Hrivnak and Raji are betting on users to discover new artists from videos shared by friends in their News Feed, connect with other fans in a Facebook Group, and react to video premiers in real time.

Facebook is also launching a new destination for music in Facebook Watch, where users will be able to explore music videos by genre, artist or mood, as well as themed playlists like “Hip Hop MVPs,” “Trailblazers of Pop” and “Epic Dance Videos.”

“Over time, the experience will become more personalized to your tastes, based on artists you follow and videos you engage with,” according to Hrivnak and Raji.