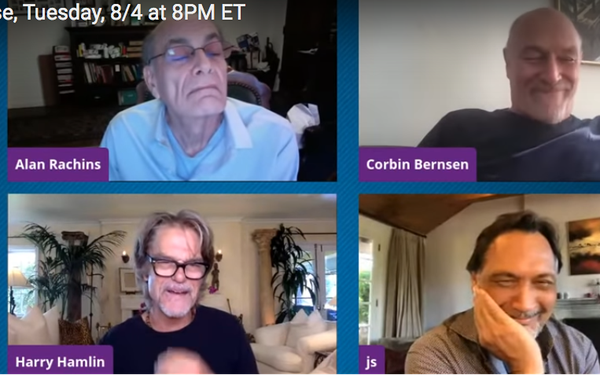 The main men of "L.A. Law," with Jimmy Smits at bottom right.

Who knew Susan Dey (Grace Van Owen on “L.A. Law”) was such a mensch? Or that Kelsey Grammar, despite his narcissistic turn on “Frasier,” made sure every one of the show’s ensemble cast got their moment to shine?

You’d know if you, like me, had streamed cast reunions of “L.A. Law”  and “Frasier” on “Stars in the House,” a twice-daily series of TV and Broadway-related live sessions to benefit the Actors Fund. Episodes are then archived on YouTube.

With most actors at home and ready for their Zoom close-ups, reunions of old shows and cast get-togethers of current-but-pandemic-paused series have become a trend — and they’re all free -- unlike the long-delayed “Friends” reunion on pay channel HBO Max, which requires a subscription.

Now, we get to see how actors treat their peers and talk as themselves, not their characters.

On a get-together of castmates from the current “One Day At a Time,” two entertainment icons who lived through World War II discussed the horrors of today’s political/health crisis. Series creator Norman Lear, 98, asked series star Rita Moreno, 88 (Lydia): “Have you ever seen a moment that resembles this one?” “No, never,” answered Moreno.

Getting back to Dey: She was smart and charming on Zoom. Her anecdote about pitching series creator Steven Bochco a story line on special-needs children neglected by public schools showed she was socially aware, too. 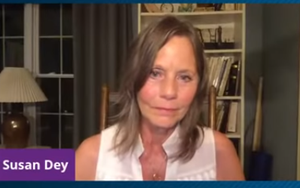 There was also behind-the-scenes dishing, like how Bochco got the idea to put prim-and-proper character Michael Kuzak in a gorilla suit. Harry Hamlin, who played Kuzak, had told Bochco about a real-life Halloween court visit where the clerks dressed up in costumes.

In a session for the Vietnam-war-themed “China Beach,” Dana Delany (Colleen) talked about how the producers brought in Vietnam vets before every season, so cast and writers could learn from their stories.

Many other reunions, like “White Collar,” Taxi” and “Scandal,” are available on “Stars in the House.” Googling around, I’ve also found cast get-togethers of current shows, such as “Ozark” on Paleyfest 2020.

Still, there’s one reunion I’ve been jonesing for that isn't available: “Monk.” Its title character, the germaphobe detective Adrian Monk, might be the prescient symbol of the pandemic. So far, no Zoom session. But Tony Shalhoub (who recovered from the virus in real life) did release this video, featuring himself and other members of the cast in a virtual mini-“Monk” pandemic-themed episode.

My favorite scene? Monk washing his hands to “100 Bottles of Beer on the Wall.”