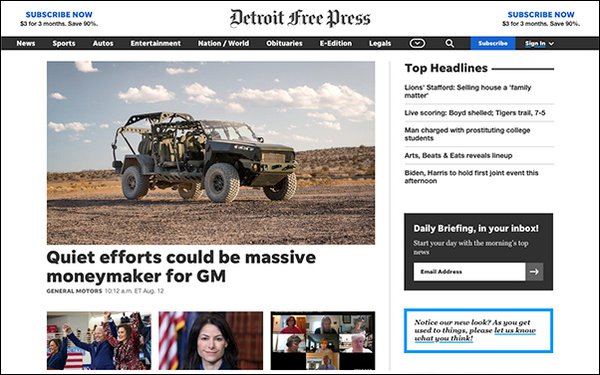 The stories will be marked as "for subscribers" on freep.com. Most Free Press content online will remain free.

"The vast majority of papers in the country have some sort of digital access plan to help fund local journalistic efforts," stated Free Press editor and vice president Peter Bhatia. "We are grateful for the support of our readers as defined by the massive digital audience we have every day. We're asking now for a modest contribution to make sure we keep local journalism strong for our readers in Detroit and Michigan."

The Free Press set audience records in March, April and May, according to Bhatia.

“‘Subscriber-only’ stories will be the unique, revelatory, in-depth stories that are not available elsewhere,” he wrote.

The subscriber-only stories could include investigative journalism, insight from sports staff, deeply reported work from critics and beat writers, or photos and videos from visual journalists, according to Bhatia.

“Your subscription will help us keep up the fight for openness and freedom of information in Michigan,” he wrote.

Initially, about five stories each day will be for subscribers only, but that number will vary as determined by the newspaper's editors.

Freep.com is also getting a revamp. The site will be better organized, with improved navigation and typography, according to the staff.

The Detroit Free Press will also soon launch an initiative that dives deeper into the neighborhoods of Detroit.

Digital subscriptions will start at $3 for the first three months. Digital subscribers also get access to the daily e-edition of the paper.

Current subscribers to the Free Press paper or the e-edition will be able to access subscriber-only stories.

The Detroit News, which has a joint operating agreement with the Free Press, is also putting up a paywall, with the same model and rate.

More than 6.1 million different visitors turned to detroitnews.com in June alone, according to Gary Miles, editor and publisher of The Detroit News.

Breaking news and “routine stories’ will stay free, but “our most unique, informative and in-depth content — often the most costly to produce — will be available only to subscribers,” Miles wrote in a note to readers.

The paywall “is driven by the long-term need to replace declining advertising revenue in print newspapers, a decline hastened by businesses reeling from the global pandemic,” he noted.

The Detroit News will also debut a redesigned website and a new commenting system.