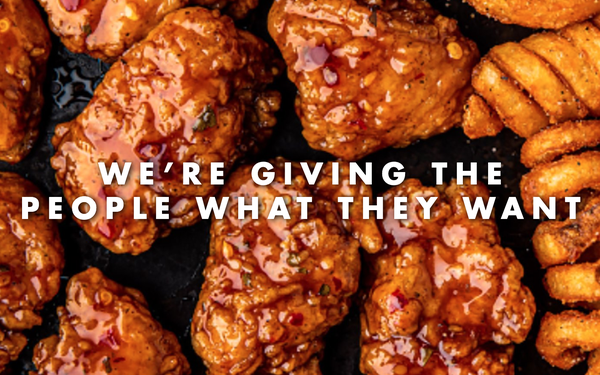 Brinker International, parent of Chili's and Maggiano's, has been shaking off its dusty reputation for several years now. But with the launch of It's Just Wings, a virtual concept delivered by DoorDash, the company is starting to look like a restaurant company of the future. And some observers see plenty to admire in the way it is navigating the pandemic.

Brinker, based in Dallas, just released its latest numbers. For its fiscal fourth quarter, results were as dismal as expected, given the temporary closures of both Chili's and its Maggiano chain during the pandemic. Company sales fell 31% to $553 million, compared to $804.8 million in the comparable period of the previous year. And operating income swung to a loss of $53.2 million, compared to $64 million in the year-ago period.

But it also updated its forecast for the first quarter to be a bit more upbeat, now projecting a decline of restaurant sales in the low to mid-teens. And the company is especially bullish about the debut of It's Just Wings, which its CEO says could grow into a $150 million brand in its first year.

"Our continued strategic focus on value, off-premise, digital and scale is allowing us to successfully navigate through the pandemic," says Wyman Roberts, Brinker's chief executive officer, in its announcement. "Leaning into these existing strategies … has allowed us to accelerate our performance and deliver industry-leading results."

While dining room capacity continues to be reduced, Brinker says 885 Chili's and 52 Maggiano's restaurants with dining rooms or patios are open, representing 84% of total company-owned restaurants.

The company introduced It's Just Wings, a virtual brand offering through a partnership with Doordash, in 1,050 of restaurants in June. (Technically, it's not just wings–it also sells curly fries and fried Oreo cookies.)

Roberts says It's Just Wings is already generating more than $3 million in weekly sales, much of it incremental business. Operating on a ghost-kitchen concept that enables the company to prepare the food with minimal investments, "it's exceeded our expectation pretty much on every turn," he says, in a conference call webcast for investors.

He also says its partnership with DoorDash has enabled it lower marketing costs substantially.

Deutsche Bank just issued a "Buy" recommendation for Brinker's stock. "It appears evident to us that a complete narrative shift is now underway," writes analyst Brian Mullan. He says there is reason to be optimistic that Brinker can exit the crisis with better profit margins and an edge over its competitors.