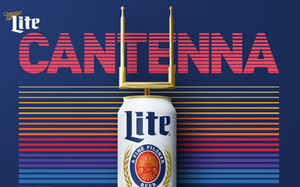 The beginning of the NFL season has led to the beer industry’s latest jokey marketing idea: the Miller Lite “Cantenna” that ostensibly helps cable cord-cutters watch games without illegally streaming them.

On Sunday night, Miller Lite says  it “flooded social feeds with links that imitated sketchy streaming sites” and surprised fans with "something much better.”

That would be the Cantenna.

It is, to be clear, a TV antenna -- shaped like a football goal post -- and a beer. When that is attached to a TV, a viewer  should be able to tune in games broadcast over local TV.

Miller Lite began the sweepstakes to win one on Monday. It will give away 85 Cantennas now through Oct. 13.  It says they’re each worth $46.

The Miller Lite video begins as if you’ve tapped into a grainy live stream for a game. An ad for a local personal injury attorney is wrapping up. The video continues with a distant voice that sounds like sportscaster Al Michaels jabbering about the new season and a few seconds with authentic bootleggy skips (that skip over the mention of the NFL, it seems).

And just like the ode to prime-time football made popular years ago,  a Hank Williams Jr.-like country star narrates the current situation to the theft-of-service fan whose failure to connect is disappointing his guests:

"Well you waited all year for football to get here
Now it’s about to start
You can almost smell the grass
You can almost taste the beer
But instead you’re on a shady Russian website
So keep on clickin’ those links
Til your face turns blue
Cuz Sunday Night is back
(But not for you!)"

The streamer strikes out. The feds appear at his door hauling him away for violating the Copyright Act of 1976. At the end, he’s in prison, with his lawyer  telling him, “You’re looking at 10 to 15 years.”

If only he had used a Cantenna.

The idea behind the longish (3:31) ad,  from DDB, is that during the COVID-19 crisis, football fans might not want to chance going to a sports bar, or they’re closed. So the alternative is to try to stream the game on a laptop because many millennial fans don’t subscribe to cable.

“The Miller Lite Cantenna is a working digital antenna but also a real beer,” says Sofia Colucci, global vice president, Miller Family of Brands. “Since a lot of us can’t go to the bars in real life, we are going to be watching from home and resorting to streaming... We’re not actually getting into the antenna business. We’re simply using this as a tool to celebrate our football-loving fans and inspire a little Miller Time this season.”

Miller Lite introduced another promotional gimmick -- the Cantroller -- in 2019.  It was a beer can that doubled as a video game controller.

There are plenty of illegal streaming football sources, with tons of pop-up ads and the chance of malware. And there are much easier, legal  ways to stream a game.  The NFL or Yahoo app lets you watch local and prime-time games live, for free, which makes the Cantenna unnecessary because that’s exactly what’s on your local station, too. But it’s a fun idea.