Critics Form Their Own Facebook Oversight Board, Citing Endangered Democracy 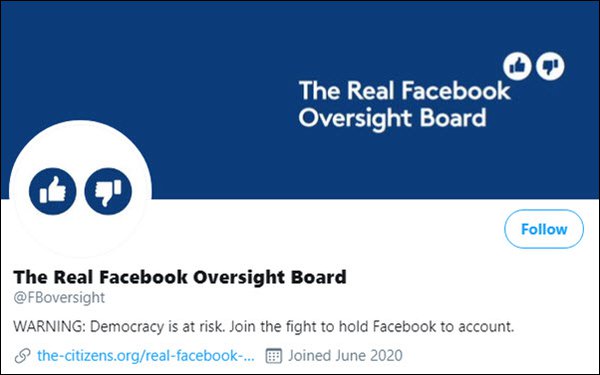 A group of high-profile experts from academia, civil rights, politics and journalism — tired of waiting for Facebook’s own independent oversight board to take action, and with the election approaching — have created their own, reports NBC News.

The approximately 25-member group, dubbed The Real Facebook Oversight Board, says it will analyze and critique Facebook's content moderation decisions, policies and other platform issues.

The group will strive to exert some counter-influence to dangerous information being spread on Facebook before the election, as well as on an ongoing basis, according to Observer and Guardian journalist Carole Cadwalladr.

In 2018, through a whistleblower, Cadwalladr broke the story of how Facebook allowed Cambridge Analytica to use millions of U.S. voters’ profile data to enable Donald Trump’s election team to predict and influence Americans’ voting decisions.

The Citizens, a U.K.-based advocacy group formed by Cadwalldr and funded by the philanthropic investment firm Omidyar Network, drove the development of the Real Facebook Oversight Board.

"This is an emergency response," Cadwalldr told NBC News. “We know there are going to be a series of incidents leading up to the election and beyond in which Facebook is crucial. This is a real-time response from an authoritative group of experts to counter the spin Facebook is putting out."

Facebook revealed a slate of 20 members for its own independent oversight board this past May.

However, that group won't start reviewing Facebook’s decisions until mid to late October, and will have up to 90 days to issue decisions.

And Facebook is of course not obliged to incorporate the alternate oversight board’s input into its policies or decisions, though the company, faced with growing numbers of groups opposing its practices, says it welcomes such input.

“Many groups have strong opinions on how Facebook should moderate content, and we welcome new efforts to encourage debate,” a spokesperson for Facebook’s own Oversight Board told Axios. “The members of the Oversight Board are focused on building an institution that will make binding decisions on Facebook's most significant content issues.”