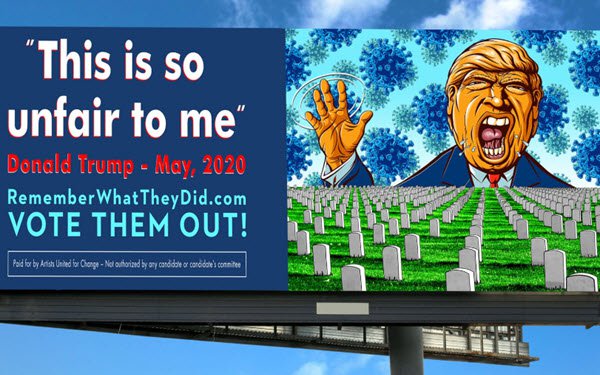 A political action group organized by artists has rented nine billboards and plastered the streets of Cleveland with anti-Trump posters in the lead-up to the first presidential debate, to be held in the city on Sept. 29.

The ads are lining the route from the airport to downtown Cleveland, the major streets to hotels, and the debate site on the Cleveland Clinic’s campus.

The effort is part of a broader “Remember What They Did and #VoteThemOut” campaign organized by artists Scott Goodstein and Robin Bell and Artists United for Change, a small anti-Trump super PAC pitching in to get out the vote among young people and the African American and Latinx communities frequently underrepresented at the polls and often not reached with traditional political advertising.

The group has launched dozens of billboards and posted thousands of street art posters across five battleground cities, including Cleveland, Detroit, Milwaukee, Pittsburgh and Phoenix, and is "on track for a campaign budget of $500,000 through Election Day, reports a spokesperson.

The ads urge viewers to go to RememberWhatTheyDid.com, where they can pledge to vote, register to vote, learn about early voting and crowd-fund more billboards in battleground communities across the country.

The ads feature images from artists across the country, and quotes from Trump, to “take on Trump’s failures” on various issues, in the group’s words.

Examples include mishandling the Coronavirus pandemic (above), separating migrant children from their parents, and encouraging violence against peaceful protesters (both below).

The Cleveland arm of the campaign was organized by Goodstein and Jeff Rusnak, both Cleveland natives, and Bell, known for doing video projections on the Trump Hotel in Washington, D.C.

The Collective PAC, which describes its mission as building Black political power with candidate support and nationwide voter registration and education campaigns, partnered on the Cleveland effort through its own super PAC.