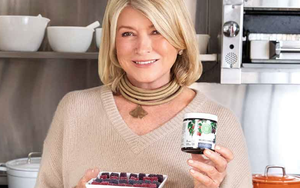 If so, thank Martha Stewart and COVID-19 for helping to propel the trend.

In her latest business venture, television personality and entrepreneur Stewart is partnering with Ontario-based cannabis company Canopy Growth Corp. for a line of “wellness” edibles infused with hemp-derived CBD.

“Find your inner Martha with my new CBD collection,” Stewart says in this video posted on YouTube by Direct CBD Online.

With her launch of gummies, soft gels and oils, Stewart “brings a familiar household name to the category,” research provider Hartman Group wrote this week. “The launch brings a once-controversial product even further into the mainstream.”

Hartman also noted that “consumer interest in functional products like CBD gummies has risen during the pandemic.” In a recent survey, the company found that “among consumers aware of COVID-19, 6% said they were adding CBD to their diet to manage or treat concerns about immunity.”

Interest in CBD-infused gummies mirrors the edible-cannabis market, according to research firm BDSA. Cannabis contains far more of the psychoactive compound TCH than is allowed in CBD products—currently a maximum of 0.3% under federal law for CBD.

In the first quarter of 2020, BDSA found that gummies were the most widely used and most popular ingestible product for adult-use cannabis consumers in the United States—with 60% of edibles consumers having used them in the past 6 months.

So how far behind CBD is cannabis in going mainstream?

“In legal states, I do think that it is going mainstream,” Ellen Scanlon, co-founder of The High Guide—AKA “every woman’s cannabis handbook”—tells Marketing Daily. “As a country, I think we have a little way to go.”

In 2019, Scanlon and college friend April Pride launched a podcast series titled “How To Do The Pot” to answer some of the most common, “secretly Googled” questions women have about cannabis.

“There are 76 million women over 21 living in states with legal cannabis, and that is exactly who we are talking to,” Scanlon says.

The podcasts’ 85% female audience is a reflection of the realities of the human body “because hormones play a big role in how cannabis affects the body, and women have more hormones than men,” she adds.

Scanlon cites autoimmune diseases, menstrual pains and endometriosis as examples of physical issues that cannabis can help. “The second-highest number of receptors for cannabis are in the pelvic region and women deal with pelvic-region pain far, far more frequently than men do.”

In November, residents of New Jersey will vote on whether to legalize recreational marijuana. Marijuana Business Daily predicted that approval in New Jersey could cause a “domino effect” involving New York, Pennsylvania, Connecticut and Rhode Island.

The publication quoted Scott Rudder, president of the New Jersey CannaBusiness Association, as saying that New Jersey “will be the final hurdle for New York, Pennsylvania and surrounding states.”