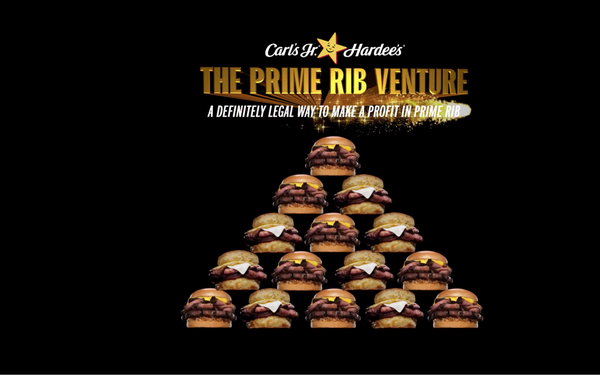 Investing in fast-food sandwiches may not be the usual path to venture-capital fortunes, but that's not stopping Carl's Jr. and Hardee's from having fun with the new prime rib menu.

CKE Restaurants, which owns both quick-serve chains, promotes the limited-time offers with a flashy get-rich-quick ad campaign. Called "Prime Rib Ventures," the campaign is billed as "a definitely legal way to make a profit in prime rib."

"The idea behind the campaign -- that sandwiches at this price are just too good to be true -- came together by working with our agency partners," says Patty Trevino, senior vice president of brand marketing for CKE Restaurants.

She tells QSR Land that the Nashville, Tennesee-based company was "looking for a way to break through the sea of sameness, with most restaurants promoting value meals that are two for this price, or two for that. We wanted something that was a bit more premium, but still a convenience. This is not about having a typical run-of-the-mill burger."

The campaign, narrated by singer Lance Bass, included three "rounds" of investing. The first offered $10 for $1, the second, $7 for $1. Both sold out of the gift cards almost instantly. The company is anticipating the same demand for the third and final round, offering $5 for $1, later this week.

And while getting $10 "rib-turn" on a $1 investment may sound too good to be true, the ad says, "it's got a promotional video, so it must be real."

Partners include 72andSunny New York and media agency, RPA, as well as social media and public relations teams. "They all came back with this holistic, 360-degree idea for the activation that brought it to life. It's just been a great collaboration," says Trevino. "Everything -- TV, social, PR -- it's all working together. This is one of the strongest promotions that we've had in the past few years."

For example, in social channels, the campaign is using sub-Reddits to target investors and foodies, "creating conversations that felt right for those communities. And of course, the idea is to keep building the brand personality, giving it a little attitude, giving it some humanity."

About midway through the two-week promotion, the campaign is overperforming, according to Trevino. Ultimately, the QSR chain will measure the effort by performance against forecast, sales volume and brand love, she says.

Trevino adds the company tracks the "love" metric monthly, driven by brand awareness, brand linkage and brand consideration. "Do people see our ads? Do they link them back to Carl's or Hardee's? And did they consider coming to the brand for this product?"