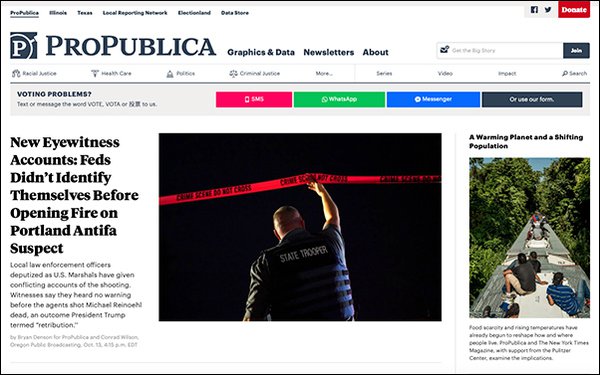 The reporters are all based outside of the United States coasts.

Deon Hampton, based in Cincinnati, Ohio, will be a national reporter on the general assignment team beginning on November 2. He is currently an investigative reporter covering criminal justice and COVID-19 at the Cincinnati Enquirer. Hampton has previously worked at Newsday, the Bergen Record, the Tulsa World and the Fort Collins Coloradoan.

Bracey Harris will be a national reporter on the enterprise team, based in Jackson, Mississippi. She is currently a reporter with The Hechinger Report, a national nonprofit news organization focused on education. Harris previously worked at the Jackson Clarion Ledger as a politics and education reporter. She starts on October 24.

Elliott Ramos is now a data reporter on the data graphics team, based in Chicago. Most recently, he was the data editor at WBEZ, the public radio station in Chicago. Previously, Ramos worked in various editing roles at TheWall Street Journal and the New York Daily News.

ProPublica Illinois, which was launched in 2017, will be transformed into a new regional hub covering the Midwest. Four reporters will join the existing Chicago-based staff, with new positions focused on Wisconsin, Michigan and likely Missouri.

Richard Tofel, president of ProPublica, stressed the importance of hiring people to cover a region they are from or in: “You want a staff that aspires to be representative of" the area they are covering, he told Publishers Daily.

“We want the national staff and the company to look like the country as a whole, and we have wanted the same thing in Illinois and in Texas. We have endeavored to do that, and will try to do the same thing in the South, the Midwest and the Southwest,” he added.

With the “business crisis of the press” threatening investigative and local journalism, Tofel said this expansion means ProPublica will have a combined national staff of about 70 reporters, and a regional staff of roughly 45.

“We are operating at both of those levels at a considerable scale,” Tofel said. He claims this is the largest staff of investigative and local reporters “compared to anybody else that does this kind of work around the country.”

ProPublica expects to add nearly 30 new positions across the U.S.

The expansion is made possible by two significant grants from philanthropic entities, according to the organization.