Did You Hear The One About The Brand Guy Who Delivered A Punchline At The ANA? 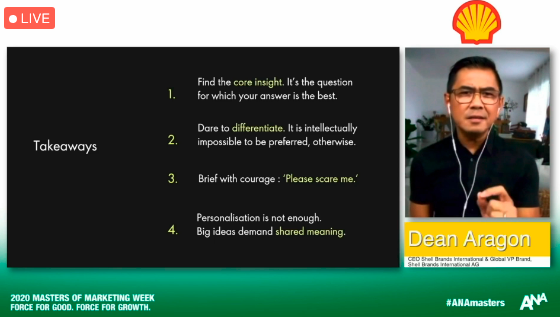 As part of a wide-ranging discussion about the appropriate use of data, insights, and most importantly, human understanding, Shell Brands International CEO Dean Aragon drew an analogy between CMOs and standup comedians to make a visceral point about branding today.

Even after a brand marketing team has gone through the arduous steps analyzing data and to identify “real insights,” he said many marketers fall short in communicating by simply stating it to the consumer as a “message transfer,” likening it to a standup comedian taking the stage and saying, “I’m funny. No punchline.

“You and I know that’s not funny,” told attendees during the opening keynote on the second day of the Association of National Advertisers’ Masters of Marketing Conference, adding, “That’s corny.”

The challenge he said, is that even after coming up with a real insight, understanding how to create a “killer punchline” that will connect with consumers.

Overall, Aragon criticized many brands for being too focused on data -- especially "Big Data" -- for delivering insights and for marketing teams and their agencies not rolling up their sleeves enough to develop real insights that serve as "deep psychological levers" for conveying them to consumers.

He scoffed at the industry's conventional wisdom that modern CMOs need to be "data scientists" and suggested they instead think like "data alchemists," understanding when to use or discard data insights vs. authentic human insights, and then figuring out how to actually apply them.

He provided an example of a Shell campaign that manifested from this approach, Shell's 2019 "The Great Travel Hack" hosted by actress Kaley Cuoco (see below), which began with an insight that consumers needed to be educated about "the future of mobility" and its solution was to effectively create a reality-based competition game show in which racing teams competed in a trip across America where the winner was determined by which one had the lowest CO2 emissions.

"We gamified it," Aragon explained, adding that it was "engaging," "entertaining," "but at the same time educational."

Aragon acknowledged the process of shifting from Big Data scientists to human insights data alchemists and then ultimately applying it to engaging campaigns based on deep psychological levers is "not easy," adding, "But if it was easy they wouldn't need you."

On the upside, he said that as difficult as the process may seem, there are key advantages to be gained by not being as reliant on Big Data -- especially the kind of digital behavioral "cookie" data that is now threatened by changes being made by Apple, Google and others.

"I’m probably one of the first to rejoice [the demise of the cookie]," he told ANA CEO Bob Liodice during a Q&A following his keynote.

Aragon said many of those digital behavior insights often are incidental signals that take brand marketers down the wrong path to conclude insights that aren't necessarily representative of the "humans" people really are. As a result, he said, many brand marketers will be forced to go down to more human levels that will lead to more genuine insights and, hopefully, more meaningful marketing campaigns.