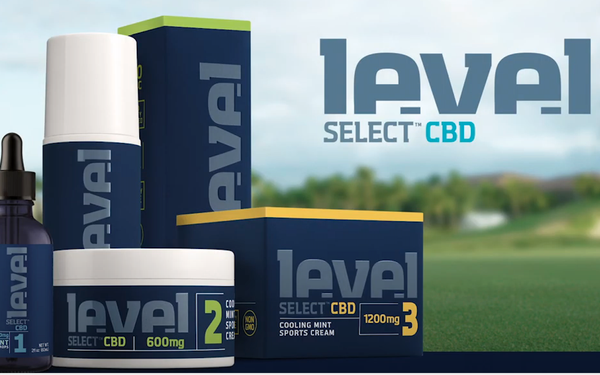 The latest national television campaign for Kadenwood LLC’s Level Select CBD products will run on linear and digital properties of Discovery Communications LLC, which has made an equity investment in Kadenwood.

Discovery’s investment is in exchange for media, according to Kadenwood co-founder and CEO Erick Dickens.

“It’s very similar to what Comcast did with Peloton, which makes us very excited,” Dickens tells Marketing Daily.

“In fact, it’s the same team that worked at Comcast that now works at Discovery that did this deal.”

Comcast’s NBCUniversal invested in fitness company Peloton Interactive in 2017 and 2018 prior to Peloton’s going public in 2019. At the end of 2019, NBCUniversal said its investment in Peloton was $294 million, according to The Hollywood Reporter.

The spot opens with Fowler driving a golf ball that ends up bouncing to a pool-side-seated Garvey, who hits it with a baseball bat to Palmer—who in turn throws it back to Fowler.

The spot will run on properties that include HGTV, ID Network, Food Network, TLC and Discovery. Companies involved in the campaign are LevitAgency, 111 Entertainment and HJA Strategic Marketing.

Following the startup of Kadenwood last year, Level Select ran the first-ever U.S. national TV campaign for CBD products. It was a direct-response test that ran for three weeks.

“We were a little ahead of our time,” says Dickens. “The industry was still a little too young. We actually had to work with all the networks to get approval for them airing it for the first time.”

“That’s what we love about Discovery networks — that there’s really good alignment with the consumer that we’re targeting, along with the demographics in general of the CBD user, who tends to be older.”

Level Select has retail distribution at grocery retailers that include Food Lion, Giant, Hannaford and Hy-Vee with “expanded distribution coming at the end of the year.”

Among other goals, the new campaign is intended to show retailers that Level Select “is a real player” in the advertising space.

“We’re not going to just say we’re going to advertise. We’re actually demonstrating that we’re an advertiser -- which is not common in this industry," says Dickens.

Prominent among Kadenwood’s efforts to establish consumer confidence in CBD products is its selection of former U.S. Surgeon General Dr. Richard Carmona as the head of its medical advisory board.