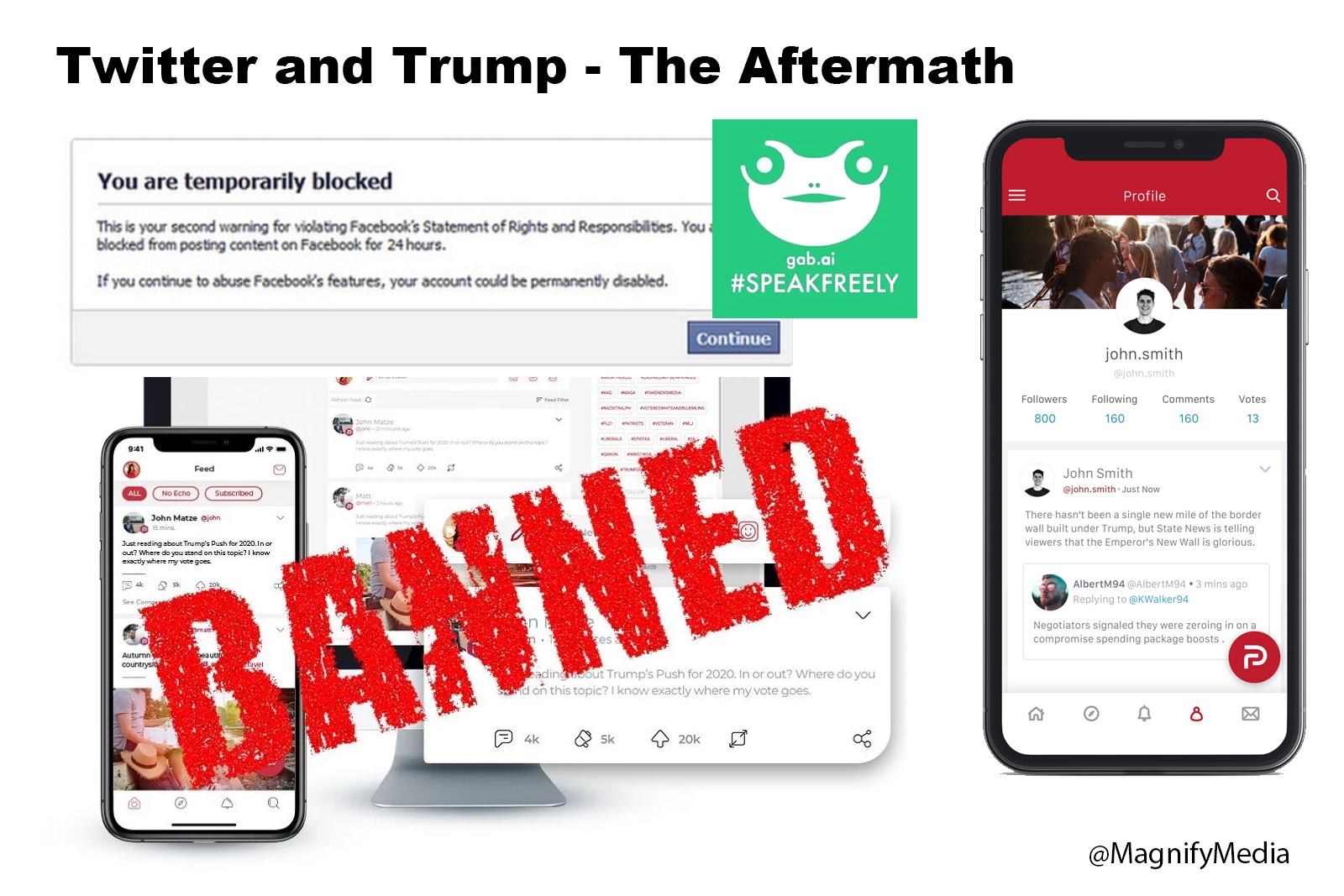 As the election ground to its slow-motion end, Donald Trump posted a series of rage tweets that were demonstrably and provably false. With great triumph, both Facebook and Twitter moved with speed to label them as fake or misleading. After years of pushing the social platforms to call out disinformation, it seemed as if some progress had been made. For a brief moment, it seemed as if the toxic world of social media had a new, even-tempered equilibrium.

But then this reporter became suspicious. The Trump contingent couldn’t have simply vanished. And, an exploration found the deep, dark recesses of the web have simply moved to new, more permissive platforms.

The two beneficiaries of the tightening of standards at Facebook and Twitter appear to be the sites Parler and Gab, both of which merit a thoughtful look.

Gab positions itself as a free-speech platform. Founder Andrew Torba claims that Gab is used by “millions of people from all different creeds and backgrounds around the world.” He told Vice.com that efforts to label the site as "far-right are tired, obnoxious, and incorrect.”

Gab launched in 2017 and came to national prominence in 2018 after the Tree of Life synagogue shooter posted an anti-Muslim screed on Gab hours before shooting and killing 11 people.

Torba told mic.com  that “Gab’s election-related policies are the same as they have always been: any and all political speech that is protected by the first amendment is allowed to flow freely on Gab. Threats of violence and illegal activity is [sic] not.”

Yet just days ago Torba was sharing a slew of unverified, misconstrued, or outright fake voter fraud claims to his 400,000-plus followers, Torba promised that a “COUP IS UNDERWAY.”

Gab has made it clear that win or lose, Trump will be welcomed with a verified account that has over 27,000 followers. Gab is proud of its far-right users, including radio host Alex Jones, Milo Yiannopolous, and British activist Tommy Robinson. They’re all banned from Twitter, Facebook, and Instagram — and so now reside on Gab.

Torba, whose profile describes him as a Christian, a husband, a father, and a patriotic American, posted hours after the election was called for Biden, “this isn’t over until January 20th, 2021.  Period.”

Meanwhile over to Parler.

John Matze is the CEO of Parler, a Twitter clone for conservatives. Parler, founded in 2018, has about 4 million users.

“We don’t have people in our office who have a ‘ban’ button,” Matze  told the Times.co.uk. “You can’t control people. What are you going to do? Someone says the wrong thing, you’re going to throw them in jail? That’s not freedom. That’s not free speech, either.”

Fox Business News host Maria Bartiromo announced on Thursday evening that she was leaving Twitter and joining Parler because of Twitter’s censorship policies.

And Parler and Gab aren’t alone. The once banned r/The_Donald subreddit has been using closed networks on Discord to reorganize and post its brand of hateful rhetoric.  And the site 4chan, and now its offspring 8chan, now known as 8kun, are all part of a network of sites that traffic in hate speech under the guise of free speech and humor.

PayPal and Patreon have moved to limit the funding sources of sites that traffic in hate speech So, while actions at the larger sites to moderate inflammatory and objectional content certainly will have an impact, the open nature of the web will inevitably have organizers ready at a moment’s notice to pick up and move to the latest most permissive platform.

There are no simple answers here. As long as publishers are willing to pander, and users willing to participate, publishers will have to work to draw a line between freedom of expression and messages that give rise to intolerance.