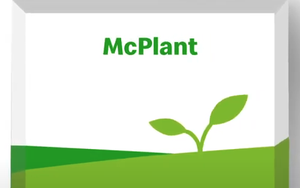 It could have been a big week for Beyond Meat—even as the company revealed a $19 million loss in its recently ended third quarter.

Pizza Hut announced Tuesday that it has chosen to partner with Beyond Meat as the QSR becomes the first national pizza company to offer plant-based, meat-substitute toppings.

But on Monday morning, McDonald’s told the world that it would be launching plant-based products under the McPlant label. The company did not mention Beyond Meat—with which it partnered for a test of plant-based burger patties in Canada in 2019.

“We have created a delicious burger that will be the first menu option in a plant-based platform we are calling McPlant. McPlant is crafted exclusively for McDonald’s, by McDonald’s,” international president Ian Borden said in a presentation.

After Borden’s comments, Beyond Meat’s stock nosedived before the company issued this statement to financial news outlets like CNBC: “Beyond Meat and McDonald’s co-created the plant-based patty, which will be available as part of their McPlant platform.”

Things did not get any clearer later in the day when Beyond Meat announced Q3 earnings and Beyond Meat founder and CEO Ethan Brown fielded questions from financial analysts who were puzzled by Borden’s comments.

Brown did his best to tiptoe around questions regarding McPlant, like this one from Bernstein’s Alexia Howard: “Could you talk a little bit about what your role might be in that platform?”

Brown responded by quoting Mark Twain: “Reports of my death have been greatly exaggerated.”

He went on to describe Beyond Meat’s relationship with McDonald’s as “good” and “really strong. Our work there on behalf of what they’re doing continues.”

Credit Suisse’s Robert Moskow pressed further by asking whether Beyond Meat is “OK” with its brand name not showing up on the QSR’s menu even if its product is. The company was cited in sales collateral and signage during the Canada test with McDonald’s.

“I think given the consumer resonance with our brand and just the momentum we have with consumers—the brand that we've established—we think it deserves to be up there on the menu. And nearly all of our QSR partners have done that and benefited as a result.

“Now we can't specify or speak for McDonald's to how we interplay with McPlant burger. But we clearly think it'd be in everybody's best interest to use our brand, and I would resist efforts to not use it,” said Brown.

Wall Street types weren’t the only ones to note the significance of what McDonald’s seemed to be signaling with regard to McPlant.

Euromonitor International research analyst Alex Jarman said the McPlant line will “significantly impact the market for plant-based foods” given that many QSRs have openly partnered with companies like Beyond Meat and Impossible Foods.

“McDonald’s decision to create its own plant-based line raises the question if other fast-food chains will eventually do the same.”

When Marketing Daily reached out to McDonald’s today for more clarity, the company pointed to statements about McPlant that it had already made public, but would not comment on the status of Beyond Meat.

It did provide a link to a very basic video featuring a picture of a green plant that evolves into the plant on the McPlant box.

Beyond Meat reported a net loss of $19.3 million in the quarter ended Sept. 26. While U.S. retail net revenue increased 40.5%, the continued impact of COVID-19 resulted in a net revenue decline of 11.1% in its foodservice business.