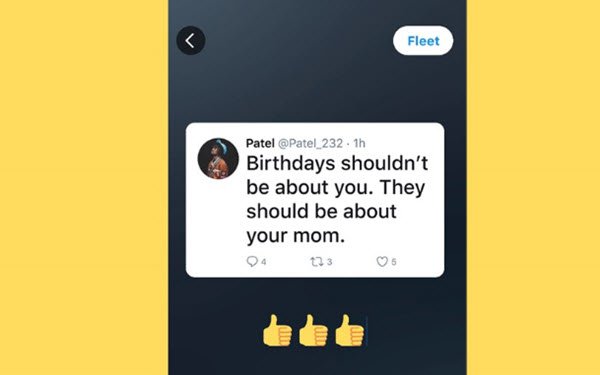 Twitter may hope to woo new users, as well as further boost tweet volumes, by allaying fears about the public, permanent nature of standard tweets.

“Some of you tell us that Tweeting is uncomfortable because it feels so public, so permanent, and like there’s so much pressure to rack up Retweets and Likes,” Twitter’s Design Director Joshua Harris and Product Manager Sam Haveson wrote in a blog post on Tuesday. “That’s why, unfortunately, there are so many tweets left in drafts… Today we’re launching Fleets so everyone can easily join the conversation in a new way—with their fleeting thoughts.”

Fleets appear at the top of users’ home timelines, and show the poster’s icon. Users can fleet text, reactions to tweets, photos or videos, and use emojis, as well as customize fleets with background and text design options.

There are no likes or retweets. Replies to fleets show up as direct messages, making the conversation private rather than public.

Tweets can be shared within fleets with the tap of a share button.

Twitter said it tested fleets in Brazil, Italy, India and South Korea before rolling them out globally on Twitter for iOS and Android, but will continue to hone the format based on feedback.

Not everyone was thrilled by the new-format news. Some tweets suggested that another disappearing-message format might just be a further complication in their lives.

"Does the fleets thing stress anyone else out?,” tweeted Rep. Alexandria Ocasio-Cortez (D-NY). “Like I use Twitter to get away from IG stories, not have it follow me around on every platform reminding me that I don’t have makeup on."