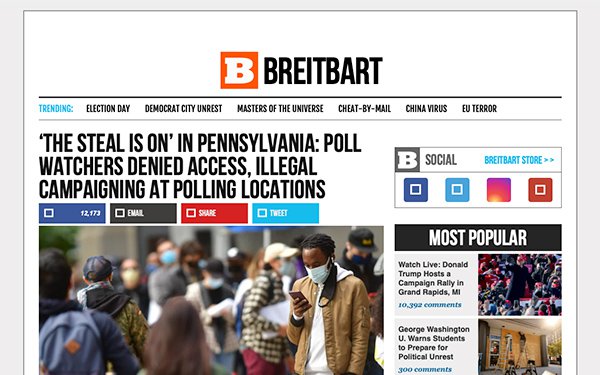 Press watchdog NewsGuard is tracking a large increase in the number of sites publishing false content about U.S. voting after the presidential election.

Two weeks after Election Day, NewsGuard’s staff has cataloged more than 100 “unreliable” websites that have published false information about voting, the election and the ballot counting process in the United States.

As of Wednesday evening, 124 sites were listed on the recently created Elec tion Misinformation Tracking Center. They include sites in English, French, German and Italian.

Bongino.com, Breitbart.com, InfoWars.com, OANN.com, RedState,com, RushLimbaugh.com and TheFederalist.com are some of the sites listed.

“Among the falsehoods these sites have published are that counting votes after Nov 3, 2020, is illegal, that Democrats are planning a violent coup, and that Republican state legislatures plan to override the will of their states’ voters by refusing to certify election results and urging the House of Representatives to decide the results of a contested election,” reads an intro on the site.

NewsGuard’s hub has an example of election misinformation published by each site on the list, as well as an explanation on why the content contains “materially false information.”

Misinformation about the election "has not gone away or decreased since the results of the election were determined," Deutch added. The NewsGuard team is "adding new misinformation publishers to the site daily."

All the sites listed on the Tracking Center were deemed "red."

“Many of these Red-rated sites were already within NewsGuard’s database of more than 6,000 websites, due to their lack of adherence to basic journalistic practices,” stated Eric Effron, NewsGuard’s editorial director.

Separately, NewsGuard also announced this week that IPG Mediabrands will use its content ratings system for its digital news media buys in the U.S. and other key markets.

Mediabrands worked with NewsGuard in the U.K. since late last year. The new agreement extends its partnership to the U.S., France, Germany and Italy.