Why Do Henchmen Remain Loyal? 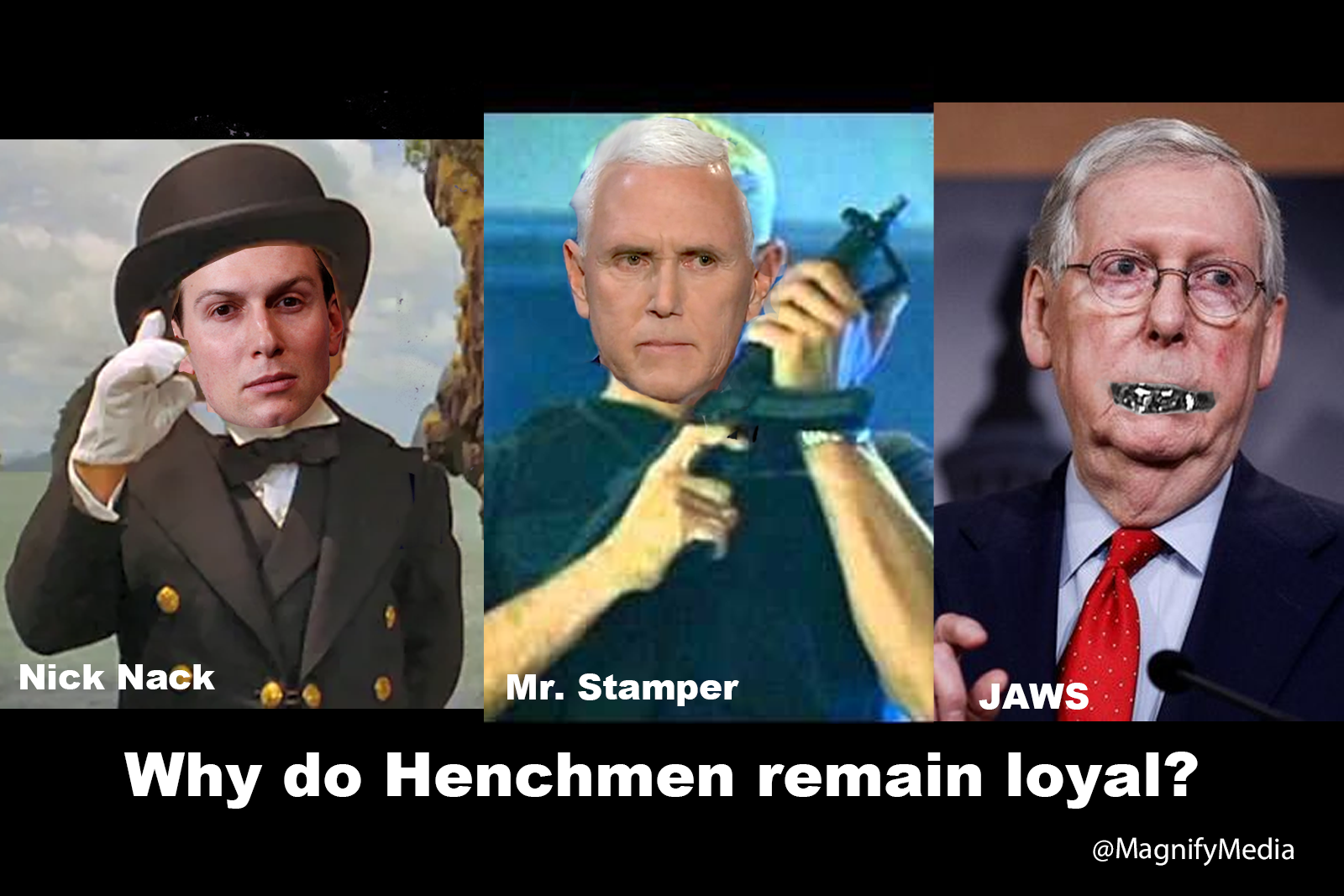 "Observe, Mr. Bond, the instruments of Armageddon” -- Villain Karl Stromberg in “The Spy Who Loved Me”

I’ve been thinking a lot about Bond villains lately. Each of them in their own way is so despicable and yet strangely likable. You can understand their underlying pathos and their drive for either world domination or destruction.

Among them, Blofeld was the head of Spectre and Bond's arch-nemesis. Goldfinger and his Golden Death laser remains iconic, and Silva  in “Skyfall” had a deeply personal vendetta against M, which made for one of the more interesting villains in Bond history.

The comparison between our current situation and the domination of a Bond villain has a rich history. Back in the 1990s, when he was the editor of Spy magazine, Graydon Carter predicted that The Donald would end up either "storing his urine in mason jars" or as ruler of the world. "He’s either going to be the greatest Bond Villain of all time or Howard Hughes," said Carter in this now super-relevant video.

The role I understand far less than villain is the role of henchman. In the Bond films, a henchman is an assassin, hired guard, or minion of a Bond villain. Often armies follow the lead henchmen, wearing uniforms to suggest solidarity.

In "License to Kill,” Dario was the righthand man in Franz Sanchez's billion-dollar drug enterprise. Steve Mnuchin would play a great Dario in today's world -- and he seems to appreciate the association. He said he was flattered when he and his wife were compared to James Bond villains after a photo of them posing with newly minted dollar bills surfaced -- because, what’s not to love about being a henchman? But like all henchmen, Dario does die in the end, shoved into a meat grinder.

Mike Pence is best played by Mr. Stamper, who first appeared in "Tomorrow Never Dies" as the blonde-haired, blue-eyed second-in-command to media baron Elliot Carver. Stamper's lack of empathy make him an even better villain than his boss. Even after Carver dies, Stamper continues to attack Bond. Things are personal between him and 007. But in the end, as with all henchmen, he dies. He's vaporized when the missile he’s trapped under explodes but doesn't fire. Kaboom.

And what about the famous mini-me: Nick Nack? Nick Nack stands at 3-foot-11. He’s a housekeeper and top henchman and butler. This is Jared Kushner for sure. As Scaramanga's henchman, Nick Nack appears innocent, and people don't take him seriously because of his limited stature, which enables him to catch his enemies by surprise. But Bond doesn’t buy it and locks him in a four-foot-long suitcase. Mr. Biden, are you Bond?

In “Octopussy,"  General Orlov is the maniac mastermind behind the plan to stage an accident on a United States Air Force base in West Germany to force nuclear disarmament throughout Germany. How can that be anyone other than Rudy Giuliani? Staging fictitious events seems to be his strong suit if you consider the Four Seasons Total Landscaping event. But Orlov doesn’t live to see if his plan worked, as border guards gun him down while he's trying to escape via train.

The thing that I wonder about is why henchmen stay loyal until the end? They’re not going to be invited into the escape plane, or get a bag of money or appreciation from the boss. If we’ve learned anything from Bond, it’s that henchmen are the first to be sacrificed as the criminal mastermind’s plans for world domination crumble.

Each face a brutal death in the end, while Bond ends up on a beach with a Martini and a pretty girl.

However, there is one henchman that rises above the rest: Jaws. In “Moonraker,” Jaws escapes from a disintegrating space station in an escape pod with his girlfriend; they open a bottle of champagne, and Jaws speaks his only line in the entire franchise: "Well, here's to us.”

All the other henchmen? If Bond provides an apt analogy, they’ll come to an inevitable end as their boss exits the series. That’s just how henchmen die.

politics
3 comments about "Why Do Henchmen Remain Loyal?".
Check to receive email when comments are posted.
Read more comments >
Next story loading