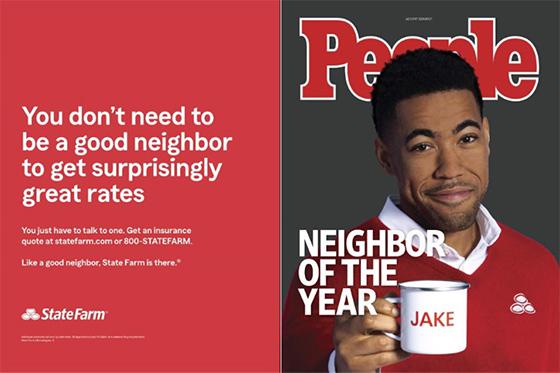 The issue hit newsstands in New York and Los Angeles on Wednesday and will goes nationwide Friday, December 4.

People partnered with State Farm to feature “Jake” in this year's issue. The fictional character featured in State Farm’s marketing is its first “Neighbor of the Year” to be featured in the Meredith Corp. magazine.

“State Farm’s ‘Neighbor of the Year’ multiplatform advertising campaign is the perfect fit for People’s annual 'People of the Year’ franchise,” Cece Ryan, senior vice president-publisher of People, told Publishers Daily. “Jake is in good company with the myriad individuals who are being celebrated by People during this very difficult year.”

The campaign with State Farm will span print, digital and social platforms to drive brand awareness for State Farm and its “Surprisingly Great Rates” theme.

It also includes a digital sponsorship with display ads surrounding content on the "People of the Year" reveal package posted on People.com, which averages 70 million unique visitors per month.

In addition, State Farm is behind a social takeover of People’s Snapchat channel, which includes State Farm’s ad pre-roll within the "People of the Year" reveal and behind-the-scenes content.

She will be based in London and oversee European operations, which includes teams in the UK, France, Italy, Germany and Spain, reaching 100 million consumers monthly.

She will report to Roger Lynch, CEO of Condé Nast; her appointment begins January 1.