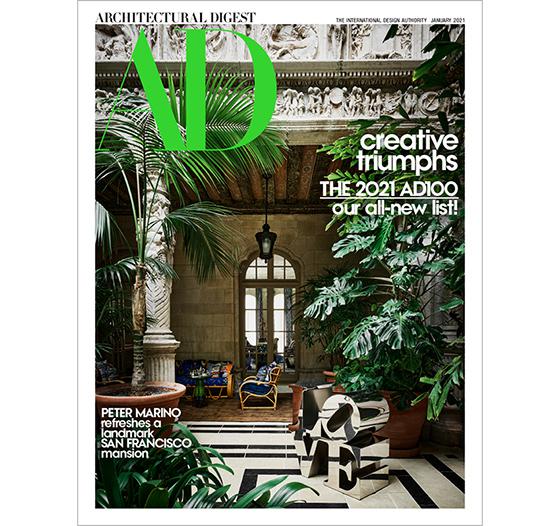 Architectural Digest has unveiled its annual AD100 list, highlighting the top 100 design and architecture firms in the world.

AD also announced it hit single-day subscription records this year. Its May issue, which featured singer Drake on the cover, set the single-day record for print subscription sign-ups from ArchDigest.com on April 8, the day the issue was released.

“This is the most diverse list we’ve ever produced,” she said.

When Astley became AD's top editor over four years ago, AD100 shifted to an annual franchise, instead of publishing every other year. And every year, Astley has made an effort to spotlight a more diverse pool of design and architecture firms.

Women and people of color are often underrepresented in the design world, she said.

“Design was like a closed club for a long time,” she said. This year “just accelerated” her efforts, “with everyone on board in the industry and the world.”

For example, 5 Sólidos is a firm on the 2021 AD100 list based in Colombia. They designed the house of reggaeton singer J Balvin, which was featured on AD’s July/August 2020 cover.

“We are making a concerted effort to not be eurocentric … It’s intentional that we are casting a wide net,” Astley said.

The list evolves every year, she said, opening up spots for more people to be included. Twenty-two firms made the list for the first time this year.

Astley believes the AD100 list should function like the Oscars: “You don’t have to win every year to say you’re an Oscar winner.”

The annual “Hall of Fame" was added to the AD100 by Astley in 2017, to give the world’s biggest firms a permanent place in the franchise each year.

For the 2021 list, six design firms were added to the Hall of Fame.

“This list is most deeply meaningful for the industry,” Astley said. “I think they want to see fresh new talent.”

Joy Moyler Interiors, for example, is featured for the first time on the AD100. Moyler is a Black designer based in New Rochelle, New York — one of the five homes spotlighted in the issue is designed by her.

These efforts are not “one-offs,” Astley stressed — more projects and collaborations are in the works.

Earlier this year, Architectural Digest’s subscription sign-up records were thanks to the influence of celebrities like Drake and Jenner, “younger and fresher” faces to AD.

“The print magazine will survive a very long time,” Astley said. She sees the magazine as “the center spoke of the wheel of AD.” Print subscriptions are up about 2% this year, she added. Architectural Digest has over 800,000 print subscribers.

Though the pandemic “was tough for business in many ways, all of our digital operations have exploded,” Astley said. People are stuck at home, looking for design inspiration and escapism, she said.

The brand experienced “record growth” on social platforms, digital traffic and ecommerce from Clever, the vertical ADrelaunched in May. Clever, which focuses more on DIY content with project guides and advice, drives 30% of AD’s traffic, Astley noted.

Architectural Digest has 17.3 million social followers, including 7 million followers on Instagram — second only to Vogue of the Condé Nast brands.