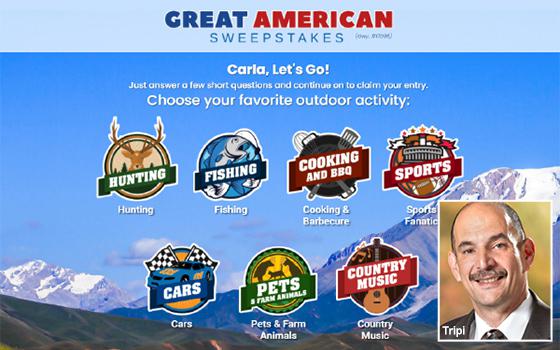 In its 67 year history, I don’t think anyone ever accused Publishers Clearinghouse of elegant stylings. In its direct mail heyday, those thick packets of sweepstakes come-ons were garish paint-factory explosions of entry forms, stamps to apply, subscription offers and giveaways. But they worked – both as promotions and as data gathering vehicles. And at this week’s Email Insider Summit, PCH VP of Digital Operations and Compliance, Sal Tripi, explained how that same approach also works in 6 billion (yes, 6 BILLION) emails the company sends each year. Ugly can be good when it is also relevant, entertaining and fresh. But PCH has always been a marketing company with data at its core. And Tripi is serious about giving consumers more control of their own data and going beyond simple compliance with CCPA and other privacy regulations. You can listen to the entire podcast here.

MediaPost: I know that first party data is of course the mantra this year. How does Publishers Clearing House go about harvesting that data?

Sal Tripi: The way we've approached collecting first-party data is not to put a survey in front of somebody and say: Give me all your data, tell me your likes, tell me what you don't like, what do you want to receive. That's very boring. People tend not to engage with that sort of thing.

We take a staggered approach where we're interrupting people's visits to us with engaging sweepstakes, perhaps, where we're picking up a profile attribute. If they're in some sort of outdoor engagement activity, “Do you like the hunting sweepstakes where you can win a hunting prize,” or “do you like to race car sweepstakes?”

And we're slowly building that on where it doesn't feel to the consumer, like, we’re collecting the first-party data for that. But we're really building a profile of what consumers like, what they don't like, in an engaging way, and giving them what they came to us for, which is a nice, sweet opportunity. 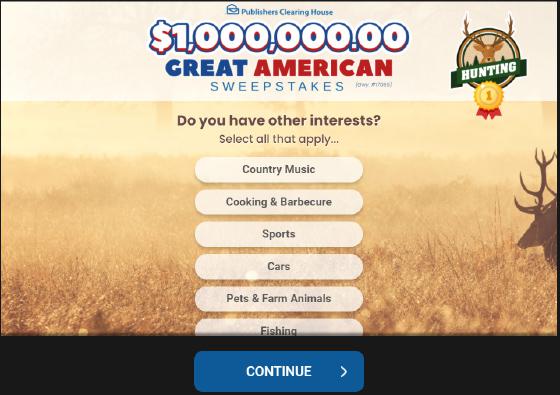 MediaPost: Let’s look at some examples of this sort of content funnel.

Tripi: The Great American Sweepstakes is working really, really well. We've created these seven different sweeps opportunities where people can go down. They can take advantage of hunting, fishing, country music; whatever it is that they like.

And now all of a sudden we have an affinity for them, too: pets affinity or cars affinity, sports. These are real, valuable affinities and immediately get this data actionable.

The first email they get is targeted toward whatever affinity that they're doing, and then we're slowly building on it from there. And we have this cascade, and we're working with internal tools, as well as external tools, to just build that connection with the consumer where we're really getting to know them.

This is much more personal, the consumers are engaging with it at a much higher rate, and the data we're getting is very accurate.

MediaPost: So let them show you through their behaviors what they want, rather than have to tell you explicitly?

MediaPost: What have you done internally to minimize risk, but also optimize value?

Tripi: When the CCPA was passed, we really looked at [it] as an albatross. What do we have to do to comply? The more we got into it, the more we saw there was some value coming out of it.

Data governance is our internal czar. We had a lot of data on basically everybody in the United States, past and present. So we went through an enormous exercise where we purged off an enormous amount of data that was beyond that useful life.

MediaPost: How do you define actionable for your data? Has that definition changed at all?

Tripi: It certainly has changed. Today's definition of actionable is if you collected on page one, you're using it on page two and three and four. And we, as well as a lot of other companies, are struggling with that, to alter that content through the user experience based on what they just did five seconds, three seconds ago.

MediaPost: What are the key things you've learned about getting there?

Tripi: It's really hard. It takes an investment in both technology and the organization, too. Defining what data means and how it should be used is really the first thing.

MediaPost: What are the key regulatory, legal and consumer tech trends that are driving your actions right now?

Tripi: The first thing that people need to really focus on is transparency for the consumer. Consumers are willing to provide data, they’re willing to engage, but there are laws and expectations that they're going to know and understand what's happening.

CCPA in particular has disclosure requirements, and do-not-share requirements, and everything along those lines that we need to take into consideration. So making sure those disclaimers are in language that a consumer could understand. No longer is legalese and a 55-page privacy policy appropriate.

There are a lot of nebulous areas of CCPA, and there's no case law to go back on. So the position that we've taken is, we've tried to understand both the letter of the law, but really, the intention.

MediaPost: So how much control do you give them, by the way?

MediaPost: So you send a sizable amount of email, nearly 6 billion a year. Beyond the usual advice to “be relevant," what specifically is working or/and proven not to work in keeping the customer base responsive?

Tripi: I think the best advice I can give to anybody is to be bold and break the rules. We live in an industry that's governed by, here are the best practices, here are the top tips, here's what your email should look like. And if you look at Publishers Clearing House emails, we break probably 50% of the rules that are considered to be industry standard best practices.

MediaPost: Talking about how you break rules.

Tripi: Well, image attached ratio. What should be a button? What shouldn't be a button? How a template should be laid out. Our average [email] click rate as a percentage of sends is 28%. So we send out 100 emails and 28 people are clicking through because it's different. We mail people up to three times a day at some point in time. And they're clicking at that rate.

But our emails look different. Every single email that they get looks different. You're not going to see the same template that they get on day [one] until maybe day 40. As somebody engages, they go through this process where we're trying to say, okay, what's the right level of emails for them? We're doing modeling based on how they're engaging.

We monitor them as certain activities occur. The modeling team says, okay, this person needs to be slowed down. We'll put them in what's called a protected class. All of those things are using data that we've captured.

MediaPost: You're not taking a real templated approach that this is an email from this brand. It's really driven more by the creative.

Tripi: Absolutely. It's different color schemes, everything is different. Some may be more official-looking. Some may be fun-looking to try to make it engaging.

Different people are coming to us for a sweeps opportunity. If we don't make that fun and engaging, they're going to think they got the same thing day after day after day. We've got to make it look different because it is a different opportunity every day.

MediaPost: Years ago, there was a great book called "The Entertainment Economy" that reminded us that people want to be entertained.

Tripi: Exactly. I want to share a very quick story just about being bold and breaking the rules. I was at an event, probably about eight or nine years ago. And one of our industry leaders was at the bar where we would always gather. He didn't know me, I didn't know him. The guy was just ragging on Publishers Clearing House emails. “They are the ugliest thing in the world.”

And I was just listening in, and I ended up going over and introducing myself to him. It was really an engaging conversation because he was based in our industry practices. So I got the laptop and showed him the stats. And this gentleman, who has become a very good friend of mine, ended up writing a book. And in the book, there's a chapter called “Breaking Ugly." It’s not always bad, and it's finding what works for your business. Don't try to be the same as Best Buy, as McDonald's. It's okay to be ugly as long as it works.

MediaPost: It’s okay to be ugly! There's a mantra.