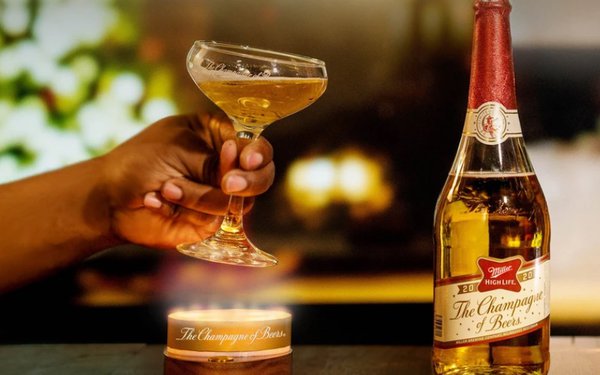 If you hate it when people say you have “champagne taste on a beer budget,” you can prove them right, and also probably shut them up, this holiday season.

Molson Coors Beverage Co. has once again rolled out its seasonal supply of Miller High Life beer available in 750-milliliter bottles, this year with the top wrapped in classy red foil.

And this makes some sense because High Life has long called itself “The Champagne of Bottle Beers.” (before dropping the “bottled” part of that years later as cans entered the scene.)

Many Champagne buyers must suspect that they’re paying for the packaging -- and so it is, but ever so slightly, for Miller High Life’s limited-time-only fancy-schmancy milliliter bottle.

It holds just slightly more than two of the 12-ounce bottles of Miller High Life sold in stores. The Champagne-sized bottle retails for $3.49. A standard six pack is $9.48 at Walmart. A six pack holds 72 ounces. That’s about the volume of three Champagne-sized High Lifes, but three of those costs about a dollar more than a six pack.

“Each year, we want to ensure we make the design unique and special, and this year’s red foil design will help us stand out at retail and give our biggest brand fans another collectible for their shelves,” says Lucy Bloxam, associate marketing manager for Miller High Life, in a company blog.

Earlier this month, High Life was also selling companion WiFi-enabled custom holiday coupe glasses sold in pairs “that light up when in use together to give friends, family and loved ones an opportunity to toast the holidays from afar.” But those sold out.

Beer history buffs might want to lift a Miller High Life every year around now. It actually came into existence on New Year’s Eve in 1903, so the special bottle celebrates that special event. And for a greater Champagne connection, Miller High Life chose that slogan because at the time, there weren’t many bottled beers to choose from, so it could plausibly make that brag.

Until the 1970s, according to the website Vinepair, Miller High Life was considered a kind of uppity brand. The introduction of the “Now It’s Miller Time” campaign, created by the McCann-Erickson agency, made it more for the masses.