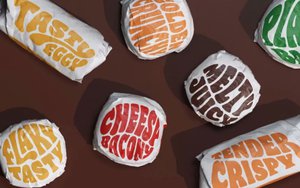 It’s a tale of two different worlds for sit-down and quick-serve restaurants heading into 2021.

Chains like Applebee’s, Chili’s, Denny’s, Longhorn Steakhouse, Olive Garden and Outback Steakhouse are starting the year with number of visits down significantly, compared to last summer and fall.

Traffic for the six—down 21.6% year-over-year during October—fell 38.4% during November, according to place-based data provider Placer.ai.

Given the ongoing surge in COVID-19 cases, visits were down 48% during the week that began Dec. 21. Denny’s fared the worst—down 60%—with Longhorn Steakhouse down the least, at 34.3%.

Meanwhile, Burger King is going back—and forward—in time with a complete overhaul of its visual brand image, while other major QSRs are bulking up on chicken menu items.

As seen in this video, Burger King is undergoing the first complete makeover of its visual identity since 1999.

It seeks to communicate improved food taste and quality, environmental sustainability and a digital-first positioning—all wrapped in a retro personality symbolized by a swirly new typeface that evokes the 1970s.

“After a tumultuous year, consumers are embracing things that remind them of simpler times and I think Burger King’s new logo and identity celebrating its heritage are easily recognizable and will resonate with them.”

One goal is to emphasize fresh ingredients in the fast-food industry, according to JKR executive creative director Lisa Smith.

“We wanted to use design to close the gap between the negative perceptions people have of fast food and the positive reality of our food story by making the brand feel less synthetic, artificial, and cheap, and more real, crave-able, and tasty,” Smith told Fast Company.

Once again, chicken is front and center this year on many menu additions in the QSR space.

For KFC it’s an extra crispy, double-breaded friend chicken breast 20% larger than the previous version. McDonald’s is tripling down with three sandwiches in the form of crispy chicken, spicy chicken and deluxe chicken.