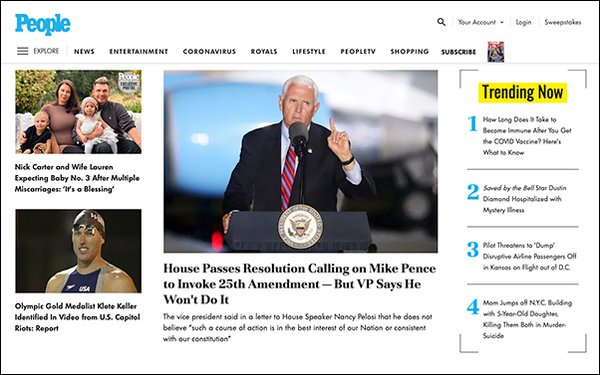 Meredith Corp., publisher of magazines such as People and Better Homes & Gardens, said its digital group last month saw a record number of online sessions and higher viewership metrics. Meredith Digital's online sessions grew 13% to 685 million in December from a year earlier, surpassing the prior record of 680 million in April, according to a company announcement.

Celebrity title People experienced 27% growth, while cooking site Allrecipes saw a 20% gain, data from Google Analytics show. The company also reported gains for EatingWell (37%), Martha Stewart Living (36%), InStyle (29%), Southern Living (24%), Food & Wine (22%) and Health (20%). A session is a group of website interactions within a given time frame, according to Google.

Meredith attributed the gains to the popularity of its food, family, home and entertainment content during the holidays. With many homebound consumers looking for ideas on cooking meals, keeping their kids entertained and making changes to their living spaces, Meredith had seen higher web traffic and digital ad revenue as marketers ramped up spending.

Meredith's video views rose 10% to 472 million in December from a year earlier. The increase included a 20% for People video and stronger performance for Better Homes & Gardens, Martha Stewart Living and EatingWell.

“The growth in our consumer engagement during the holiday season demonstrates the power of our trusted content to connect with our consumers across all of our digital platforms," stated Alysia Borsa, president of Meredith Digital. "Our food, family, home and entertainment content inspires and empowers her to plan and purchase for major holidays and every day.”