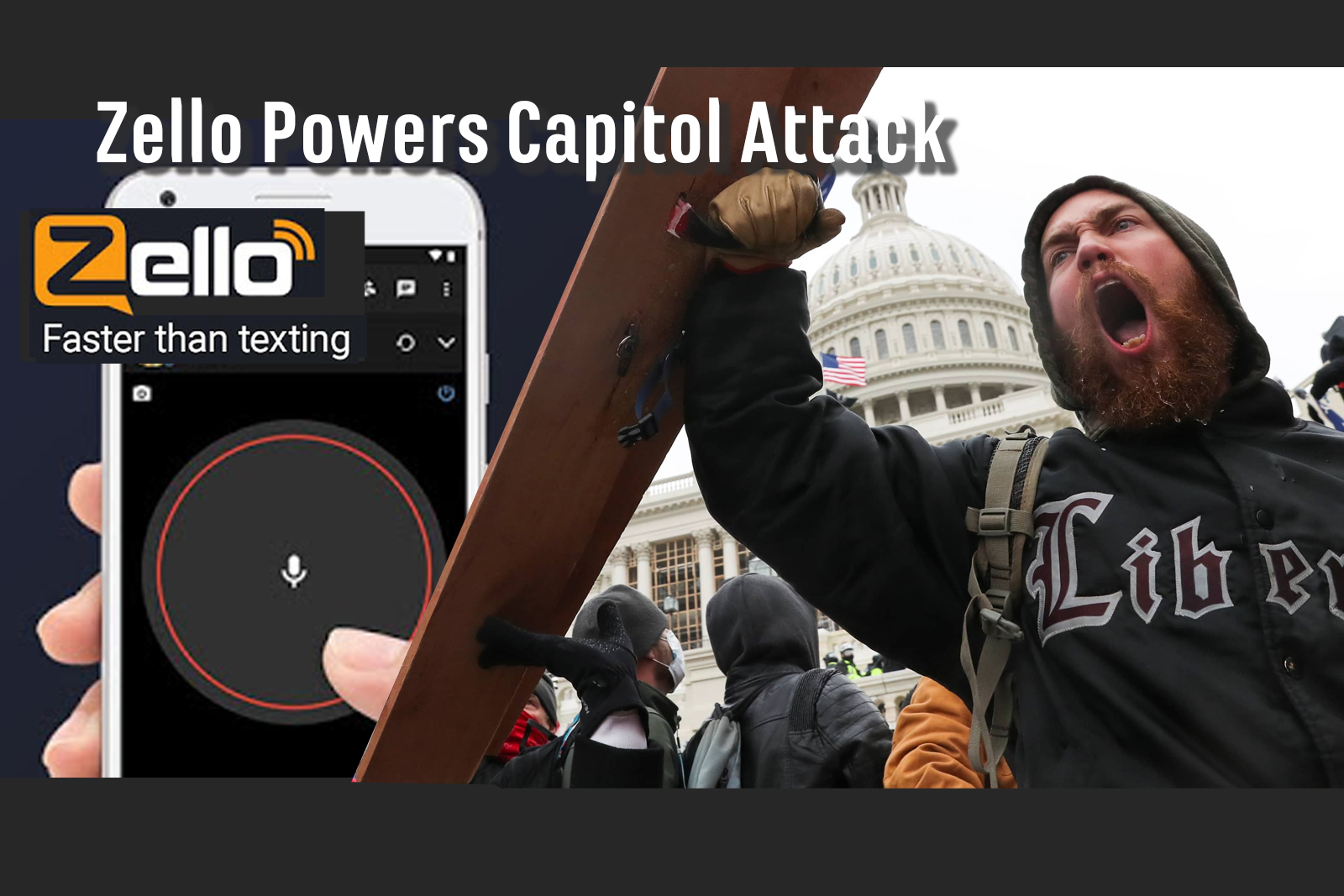 The thing about reporters is, their job is to gather and synthesize evidence. So, the day that Trump mustered his murderous mob on the national mall, and then instructed them to march to the Capital and "fight like hell,"  reporter/producer for the WNYC Studios show “On the Media” Micha Lowenger was dialed in and listening to the walkie-talkie app on the platform Zello.

The walkie talkie app is just what it sounds like -- "a push-to-talk app,"  according to its website.

Facebook, Twitter, Reddit, and a long list of platforms and service providers including Amazon Web Services are banning far-right groups that incite violence. Zello instead has claimed to be unaware of the rising tide of angry voices on the service. But if there was any doubt that the attack on the Capitol was an organized military operation, the audio logs, which Lowenger listened to, put that debate to rest.

Here are some of the conversations he reported in The Guardian: “’We are in the main dome right now,’ said a female militia member, speaking on Zello, her voice competing with the cacophony of a clash with Capitol police. ‘We are rocking it. They’re throwing grenades, they’re frickin’ shooting people with paintballs, but we’re in here.’”

According to Lowenger, the Zello user appears to be Jessica Watkins, a 38-year-old bartender from Ohio, who admitted to participating in the insurrection. Watkins told the Ohio Capital-Journal she was the leader of a local militia called the Ohio State Regular and a member of the national Oath Keepers militia.

Lowenger documents what happened next in The Guardian:  “’God bless and godspeed. Keep going,’ said a male voice from a quiet environment.

‘Jess, do your shit,’ said another. “This is what we fucking lived up for. Everything we fucking trained for.’”

The Zello channel called “STOP THE STEAL J6” was where this took place, hiding in plain sight.

“We have a good group: 30 to 40 of us. We’re sticking together and sticking to the plan,” the female voice is heard saying on Zello as they were walking toward the Capitol. “The police are doing nothing. They’re not even trying to stop us,” said the voice presumed to be Jessica Watkins.

Zello claims to have 150 million users. However, the app is also home to hundreds of far-right channels, which appear to violate its policy prohibiting groups that espouse “violent ideologies.”

“It is with deep sadness and anger that we have discovered evidence of Zello being misused by some individuals while storming the United States Capitol building last week,” the company wrote in a blog post. “Looking ahead, we are concerned that Zello could be misused by groups who have threatened to organize additional potentially violent protests and disrupt the US presidential inauguration festivities on January 20th.”

So, is Zello the next platform to find itself in the cross-hairs of those who want platforms to take responsibility for groups that organize on their platform?

Zello doesn’t seem to be in a hurry to enforce its terms of service.

“Zello simply cannot actively monitor millions of concurrent discussions,” the company told “On the Media” in October, long before the Trump terrorists stormed the Capitol. "On the Media" had provided a list of 200 far-right Zello channels with names referencing white supremacist and militia groups.

And it appears the internal controversy goes back to June, when employees at Zello became concerned about the platform being used as an organizing place for extremists, during the BLM movement and considerations about institutional racism. A Zello employee proposed a new slate of moderation practices to thwart future far-right activity on the app. But Zello’s solution was to remove certain keywords from search on the app, making extremists groups harder to find, but still just as active.

Lowenger’s recordings are haunting -- and public -- if only the FBI or other law enforcement agents had chosen to listen.

“How about if all of us stand the fuck up, and take this shit back?” asked a militia member on Jan. 4.

Zello was the organizer of travel to DC. A photo channel named “The Maga Cavalry” showed a photo of rendezvous points in Massachusetts, Pennsylvania, Kentucky, and South Carolina for drivers to meet and caravan together to DC.

You can listen to the Zello audio here.