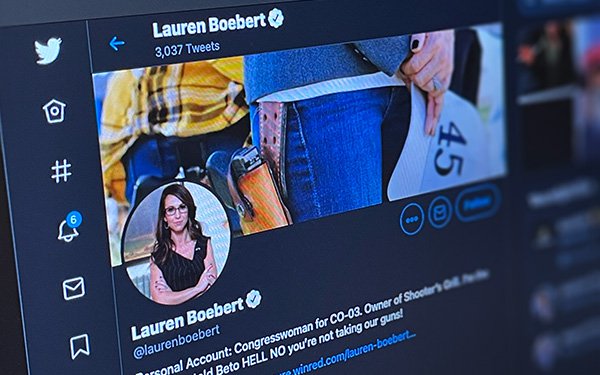 In a complaint filed Sunday in U.S. District Court in Colorado, Buentello says she was blocked by Boebert after calling for her recall.

“Buentello is a concerned citizen, and constituent of Boebert, who has tweeted criticism of Boebert,” the lawsuit alleges. “Boebert responded to Buentello’s valid criticism by following the lead of her authoritarian hero -- Donald Trump -- and blocked Buentello from viewing her Twitter account, replying to her Tweets, or otherwise engaging with those who interact within the replies to her tweets.”

Buentello adds that the Boebert's block is “particularly troubling given that she banned Buentello for pointing out Boebert’s role in the insurrection at the Capitol on January 6, 2021.”

Buentello adds in separate court papers that on January 6 the @LaurenBoebert account tweeted “This is 1776,” shortly before a mob stormed the Capitol.

Then, while the Capitol was under siege, the @LaurenBoebert account tweeted about the location of Congress members, including House Speaker Nancy Pelosi (D-California).

Buentello says in her complaint that she used her own Twitter account, @Bri4CO, to respond to those tweets.

“The afternoon of the insurrection, Buentello tweeted (tagging @laurenboebert) calling for Rep. Boebert’s recall and calling her actions seditious,” her lawsuit states. “Buentello continued tweeting (and retweeting) criticism of the Senators and Representatives, including Boebert, who voted against certification, and who fanned the flames of the insurrection.”

By January 7, Boebert blocked Buentello on Twitter, according to the court papers.

The lawsuit notes that a federal appeals court ruled in 2019 that Trump violated the First Amendment by blocking critics on Twitter.

The court wrote in that case: "The First Amendment does not permit a public official who utilizes a social media account for all manner of official purposes to exclude persons from an otherwise-open online dialogue because they expressed views with which the official disagrees.”