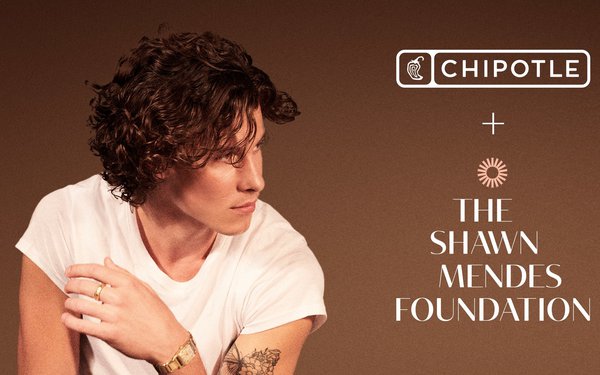 Chipotle, always looking to find ways to win with young consumers, is partnering with the Shawn Mendes Foundation. The limited-time promotion aims to reward young innovators with "Wonder Grants" so they can pursue new ideas in sustainability.

The Newport Beach, California-based chain is pushing the "Shawn Mendes Bowl" on both its app and website. For every bowl sold, it says it will give $1 to the foundation. The bowl, a concoction that includes Chipotle's new Cilantro-Lime Cauliflower Rice, is the brand's first time using a menu item to raise funds for philanthropy.

Mendes, a Canadian whose pop-folk songs have attracted tens of millions of followers, has been outspoken about sustainability and his struggles with anxiety. The Wonder Grants are tied to the debut of his album "Wonder," released last month.

Mendes has worked with such brands as Tim Horton's and Calvin Klein.

Chipotle is also linking the effort to its Real Foodprint dashboard, which lets people track Chipotle's cumulative potential impact compared to orders that use conventional ingredients.

The dashboard, introduced back in October, rates food on how much less carbon is released, gallons of water saved, soil health, antibiotics avoided and organic land supported.

With more than 2,700 restaurants, Chipotle is faring better than many of its competitors in the challenging pandemic era, reporting a 14% increase in revenue in its most recent quarterly results.

But overall, industry sales seem to be recovering as restaurant companies get increasingly adept at serving customers observing COVID-19 protocols.

Baird, which tracks industry sales, says that comparable sales at restaurants in the first half of this month "accelerated sharply from December across segments behind benefits from consumer stimulus checks," writes analyst David E. Tarantino in the report. "We expect the year-over-year spending tailwinds from stimulus to persist in upcoming weeks, which along with prospects for additional stimulus and the gradual rollout of vaccines should help to support consumer spending" throughout the first quarter and into the second.